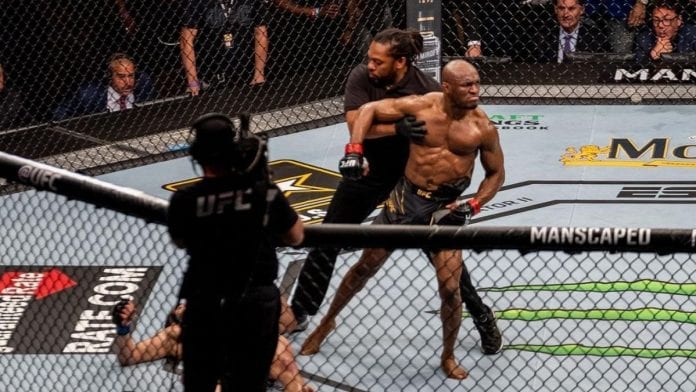 The UFC 261 fight card packed some great fights. But just when the fans and spectators thought it couldn’t get better, Kamaru Usman, The Nigerian Nightmare had a whole show stopper planned for us. Kamaru Usman and Jorge Masvidal clashed in the main event of UFC 261. This was the second time both the fighters met after the rematch in 2020. Kamaru Usman ended the fight in the second round as he knocked out ‘Gamebred’ with a clean right to the face in the second round.

UFC stars and aces were lost for words after the splendid performance of Kamaru Usman. This was the welterweight champion’s 14th consecutive win in the division. He has not shown signs of declining and will continue to kill every opponent in his way. Read further to know how the MMA and UFC Twitter exploded after the UFC 261 main event.

Kamaru Usman’s former rival and a fighter who is considered a problem for the welterweight division, Colby Covington was expected to talk trash after this fight. “Marty looked like trash, but it’s not like you have to be any good to beat Jorge Masvidal What’s that now 20 losses? Backstabbing bum,” he wrote on his Twitter after the fight. Covington is next in line for the title shot.

One of UFC’s GOAT, Amanda Nunes thoroughly enjoyed the fight card and clearly enjoyed the main event. “Amazing Night,” she wrote on Twitter.

Kamaru’s former teammate and rival, Gilbert Burns swallowed his pride and ego and congratulated Kamaru calling him the best fighter in the world right now. “Congratulations to the champion Kamaru Usman with no doubt one of if not the best pound-for-pound fighter in the world! Good job,” he wrote.

Derrick Lewis, Belal Muhammad, Aljamain Sterling, and Dominick Cruz too were stunned by Usman landing that right hand on Masvidal in the second round.

Aljamain called Usman the greatest welterweight of all time, which is a very big claim too make.

Saunak Nag - June 15, 2021
The latest episode of WWE RAW was an action-packed one that included a lot of staggering individual performances. From Jeff Hardy saving his career...

“I was making many millions of dollars,” Georges St Pierre reveals...