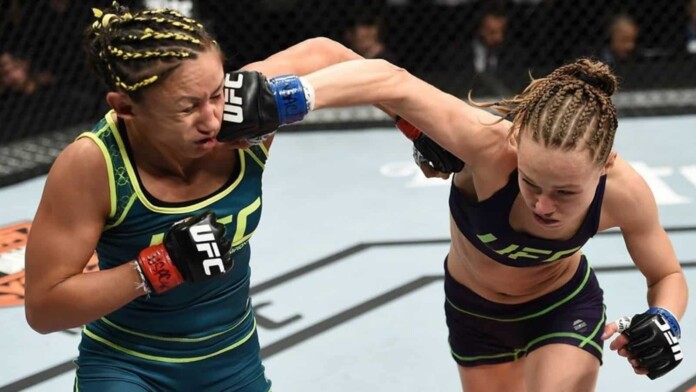 Carla Esparza the inaugural women’s strawweight champion climber her way back to the top and identified herself as a title challenger after her dominating performance at UFC Vegas 27 against the previously undefeated Yan Xiaonan.

After the fight, everybody was expecting a title rematch between her and the champion Rose Namajunas, but Dana White wasn’t so sure, he said he is still confused about who should face Rose in her first title defense.

Now Esparza has said that this rematch is the only thing that makes sense, “I do feel confident. It’s the only fight that makes sense,” Esparza said. “Come on, Dana. She wants the fight, too. She loves rematches that she’s lost.”

“I feel with a dominant performance over the No. 3 fighter in the division, I think for me and my opinion, that should be hands down my title fight. I think that makes sense. It’s the fight that the fans want to see. It’s an intriguing matchup with an intriguing storyline.”

“I think it’s almost poetic,” Esparza said. “It’s really cool. Seven years later, I saw somebody posted that the only inaugural title holders to win their title back were Jose Aldo and I think Dominick Cruz. To be in an elite group like that and to do it after such a long period of time for me would be so rewarding.”

“I think it would be super inspiring,” Carla Esparza thinks she can cement herself amongst the elites after defeating Rose Namajunas

Esparza thinks a win like this could inspire the young athletes to never give up on their dream, she said, “I think it would be super inspiring to other fighters and other people. No matter how hard you get knocked down and how low you may feel you are at the time, you can always come back.”

“Honestly, I think we’re just better versions of ourselves from back then,” Esparza said. “Her precision and her knockouts are so much sharper than they were at the time.”

“I think my wrestling and my jiu-jitsu and everything, I’m sharper as well in every aspect. It’s just a question of how we matchup, who’s going to be able to impose their will. With a fighter who’s so dangerous like Rose, a knockout is always on the table at any moment in any fight. I think it’s an intriguing matchup.”