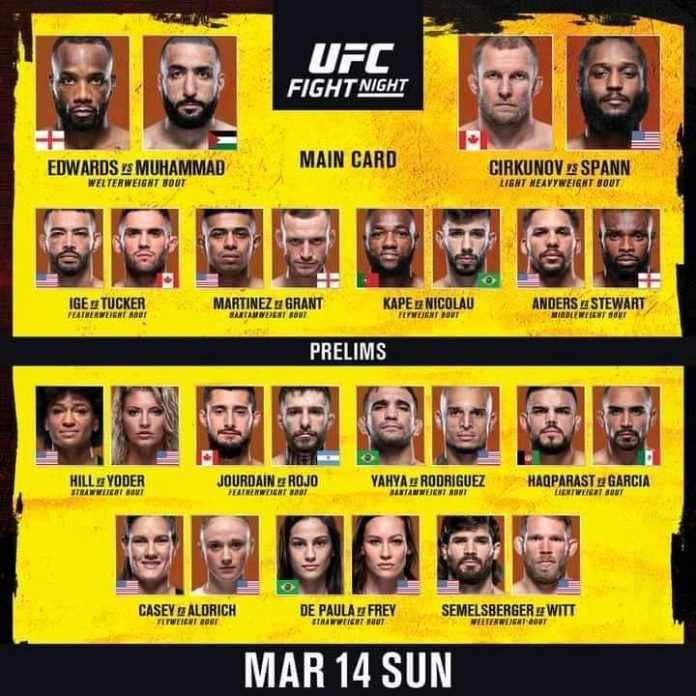 Welterweight contenders Leon Edwards and Belal Muhammad  clash in the main event of UFC Fight Night 187. Leon Edwards will be looking to continue his 8-fight winning streak whereas Muhammad will look to make a statement in his first main event fight. But before that, we had the prelims which kicked things off!

Round 1: Witt starts off the round with a strong leg kick. As he looks to be aggressive he gets too close to Semelsberger and Matthew catches him with a right overhand. Semelsberger catches him clean and cracks Witt. Follow-up shots from Semelsberger and JESUS CHRIST just like that the fight is over. Huge Knockout to start the event!

Round 1: Both the fighters exchange shots to start off the fight. Frey lands a nice right hand and then immediately takes the game to the canvas. De Paula is put to her back easily as Frey goes for ground and pound immediately. Lot of shots thrown by Frey. De Paula trying to get off her back and get away from the corner. Tries hard, but fails. Finally, De Paula recovers and turns around. Frey still manages to control from the top. End of round 1, domination by Frey.

Round 2: De Paula takes no risk and tries to keep distance from her opponent. Body kicks and leg kicks thrown from a distance by De Paula. Frey counters with kicks off her own. Frey seems to be eating a lot of body kicks. Jinh Yu tries for the takedown again and De Paula counters with a knee to the face. De Paula has answers for Frey’s takedown options. Frey ends the round with a body kick. End of round 2.

Round 3: De Paula with the same strategy and started the round with leg kicks and body kicks. This time Frey lands her takedown attempt perfectly and takes it to the ground. The position stalls and they receive a warning from the referee for inactivity. Frey looks to get under the neck for a rear-naked choke, but de Paula shows solid defense and wont’ give it up. Frey dominates her position in the ground and ends the final round.

Round 1: Casey starts the round with a strong leg kick. Aldrich showing a lot of movement but still is caught with a leg kick. Aldrich goes for the takedown but Casey denying her off that opportunity. Finally successful with her takedown, Aldrich lands a few shots of her own. The fighters are back on their feet. Lot of strikes exchanged, end of round 1.

Round 2: Casey is wild at the beginning but Aldrich counters with a couple good jabs to catch her opponent. Casey trying to be the aggressor again but ends up prey for Aldrich’s takedown attempt. Aldrich is in full control at the top and racks up points for the next few minutes. Casey uses the fence to climb back to her feet with less than two minutes remaining and they return to striking range. Casey loads up on her right hand multiple times, but Aldrich avoids taking anything clean. End of round 2, dominant from Aldrich.

Round 3: Casey again being the aggressor but this time finds success with a few punches. Both the fighters exchange blows to keep the fight interesting. As Aldrich throws a few punches she goes for the takedown. But Casey is smart enough this round to get away from that. Aldrich with a spinning groin kick that hurts Casey badly. Referee calls time-out. End of the final round. Entertaining fight.

Round 1: Both men exchange shots to start off the fight. Garcia lets go off the hands and lands a few low leg kicks. Haqparast slings the let hand through the guard of his opponent but Garcia is showing no fear. Garcia has a takedown attempt denied, but lands a solid knee. Haqparast throwing lot of punches to the body of Garcia but his opponent keeps striding forward. Takedown attempt denied from Garcia and the round ends with both exchanging shots.

Round 2: Haqparast and Garcia land body kicks in the first minute of the round. A good number of shots thrown by both the fighters. Garcia and Haqparast showing very good defense not letting their opponents take advantage. Haqparast steps in with a lead elbow then another body kick. Garcia shoot for a takedown late, but he can’t get it before time runs out. End of round 2, good round.

Round 3: Body kicks thrown by Haqparast to start off the round. Garcia tries to move forward but he is taking a lot of shots. Haqparast with an amazing combo. Garcia is trying really hard to end the momentum for his opponent. Haqparast keeps up the pressure and is forcing Garcia to move back an circle away. Haqparast lands another punishing body kick, then goes high with the kick. Complete domination in the final round by Haqparast.

Round 1: Both the fighters throw shots to start off the fight. Very shortly Yahya looks to go for the takedown. Rodriguez showing resistance as Yahya goes for the body lock. Yahya attempts to secure an arm-triangle choke from half guard, but he can’t get it deep before time runs out. End of the first round. Intense!!

Round 2: Rodriguez trying to stay away from Yahya but Rani finds success with another takedown. Rodriguez is put on his back near the fence. Yahya is dominating from the top position and puts in a arm-triangle choke. There’s no other way to go for Rodriguez but to tap out.

Round 1: Both the fighters hit it off with a couple of kicks to the body. Rojo with a nice knee that catches Jourdain real nice. Rojo very confident on his debut. Jourdain and Rojo once again back to exchanging kicks. A very competitive five minutes from both the fighters. End of round 1.

Round 2: Rojo starts off the round very confidently and looks to attack Jourdain’s head, body, and legs. Jourdain goes for Rojo’s leg, but Rojo very stable. Rojo lands in a nice combo and now has frustrated Jourdain. Rojo tries to change levels, Jourdain defends it well. Jourdain with a knee and a flurry of punches. End of round 2.

Round 3: Rojo lacks god defense to start off which leads to him eating a few punches. Jourdain with a huge punch that put’s Rojo to the ground. Jourdain with a hammerfist and Rojo is hurt bad. Rojo trying to regain composure and get back on his feet. But Jourdain keeps throwing punches for the referee to stop the game.

Round 1: Hill throws a couple punches and kicks to start the fight off with. Yoder clearly slower than Angela Hill that is costing her a few shots. Hill with a strong punch that is followed by a strong knee. Hill flurries her way inside, then with less than 20 seconds remaining used a body lock takedown to to plant Yoder on her back. End of round 1, Hill showing dominance.

Round 2: Hill is right off the bat with her momentum and starts hurting the sides of Yoder. Yoder in attempt of defense throws a lazy takedown. Hill denies it easily. Hill mixes up her offense with kicks to the legs and body. Yoder is barely landing any shots to Hill. Hill cliches up and throws a big knee, but slips to her back in the process. Yoder lands on top with less than 45 seconds remaining. Round 2 comes to an end.

Round 3: Hill is looking to finish this bout and starts off aggressively. Yoder’s body is put to work and it is clear that she is struggling. Yoder tries to trip Hill but Angela has been too dominant and continues mauling Yoder. Vicious punches thrown at Yoder’s way from Angela Hill. Angela showing no mercy and Yoder just wants the fight to end. A flurry of punches from Hill. The final round comes to end.