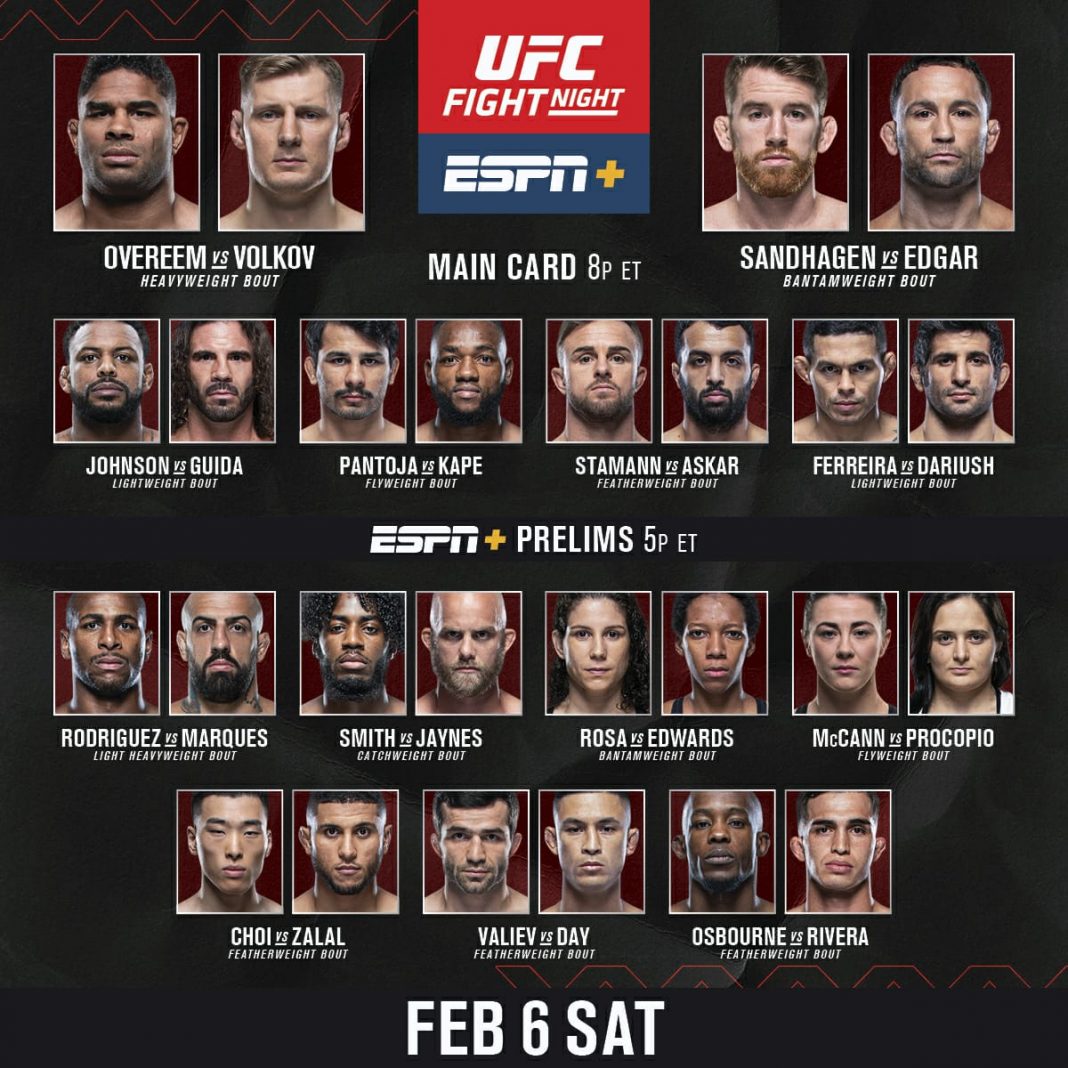 Alistair Overeem has decided to go on ‘a one last ride’ for the UFC title. The event is headlined by Alistair Overeem vs Alexander Volkov. But, before that, we had the prelims which kicked things off!

The first fight in the prelims card, was a featherweight bout between Dana White’s contender series winners – Ode Osbourne and Jimmy Rivera.

No sooner did the bell ring than, Osbourne stepped in with a massive right hand that dropped Rivera. Osbourne followed it up with some ground shots, on a badly hurt Rivera. The referee waved off the fight within 30 seconds.

Valiev began with a low kick. They traded big punches. A slam from Valiev. Valiev kept Day grounded. Then he began striking the grounded Day. Brilliant ground game from Valiev. He finished the round brilliantly. 10-9 Valiev

Valiev again began with a low kick. He then caught Day with a jab. Day began his dominant ground game, then. Valiev then landed a barrage of blows on a grounded Day. He had full control. Day somehow got away, but was caught by a triangle from Valiev towards the end of the round, only to be saved by the bell. 10-8 Valiev

Valiev once again began the round as the aggressor. Day tried his best to keep Valiev at bay. Valiev once again got back to his ground control game. Day, just wasn’t able to escape the clutches. With Day on the ground, Valiev landed a few punches. Day looked visibly frustrated. 10-9 Valiev

Choi began the round as the aggressor. They exchanged kicks then. Zalal then landed a cheeky left hook. Choi landed a high kick. Zalal followed it with a jab. They traded blows, then. Choi then landed a front kick to the body, before going for a takedown, to finish the round. 10-9 Choi

Round 1 : Both the fighters don’t hold back and start trading punches right away. Procopio gives the English to the body which she can’t do nothing about. Procopio looking to put pressure on McCann right away. Drives Molly towards the fence and trips her. The fight is on the floor. McCann keeps herself safe from the locks and chokes. 10-9 Procopio.

Round 2 : McCann starts off the second round looking to be the aggressor again. Procopoi trips Molly again and takes it to the ground. McCann has a tough time trying to protect herself. McCann back on her feet only for Procopoi to trip her again and handle her from the top. Procopoi has a few elbows coming her way. 10-9 McCann.

Round 3 : Molly McCann wastes no time and rushes forward. Procopoi using it to her advantage and puts McCann in a position to defend once again. Not much McCann can do with Procopoi on her back against the cage. 10-9 Procopoi.

Round 1 : Rosa wastes no time and takes the fight to the canvas. Edwards tries to create room for herself but struggles. Rosa in a comfortable position and throws a few punches on Edwards. 10-9 Rosa.

Round 2 : Rosa gives Edwards a few strong kicks accompanied by some fists. Edwards trying to hit but mostly missing. Rosa takes it down to the canvas again as Edwards lands a good punch. Rosa maneuvers around Edwards staying on top while bleeding from a cut. 10-9 Rosa.

Round 3 : Rosa looking aggressive to start off the round as she spits the blood from her mouth. Rosa takes the match to the floor once again. She tries to sneak in a few punches which is eventually manages to pull off. Edwards has no room to strike as Rosa is in full control. Rosa finishes off the fight in a punch to seal the match.

Round 1 : Both Smith and Jaynes start off with a very patient approach. Smith able to land a few kicks and a couple hooks to Jaynes. Jaynes mostly misses with his offense. Jaynes tries a takedown which backfires as Smith hits me solid with his fists. 10-9 to Smith. ‘

Round 2 : Jaynes once again with a few big leaps which only lead to him missing it. Smith defends a takedown from Jaynes perfectly and throws Jaynes onto the Canvas. Smith controlling from the top with Jaynes faced down. Smith lands a few nasty blows to Jaynes’s face. Smith rises as Jaynes is left in a pretty bad shape. The referee calls time and Jaynes unable to continue.