Paul Craig vs Alexander Gustafsson has been confirmed for the UFC event on the 4th of September. Craig is ranked number 12 in the rankings whereas Gustafsson who has challenged multiple for the light-heavyweight title, is not in the top 15 of the rankings. Craig will be looking forward to breaking into the top 10 of the LHW rankings and Gustafsson will have his sights set on getting back to his old dominant ways.

The news was first reported by the Swedish MMA outlet Front Kick. This will be Alexander Gustafsson’s first fight in more than a year. He last fought at UFC on ESPN: Whittaker vs Till in July 2020. Paul Craig, on the other hand, fought as recently as UFC 263, a couple of weeks ago.

Paul Craig is coming off a stunning TKO victory over Jamahal Hill at UFC 263. The Scot, just two minutes into the fight against the previously undefeated Hill, executed a stunning armbar that eventually broke Hill’s arm. Seeing that he (Hill) was defenseless, the referee waved off the fight, awarding it to Craig.

Craig is currently undefeated in 5 fights. He hasn’t lost since June 2019. The Scot will be looking forward to keeping his winning run going when he takes on the Swede.

Gustafsson, on the other hand, is coming off a submission defeat to Fabricio Werdum at UFC on ESPN: Whittaker vs Till in July 2020. The fight marked Gustafsson’s heavyweight debut. However, he is now returning to the light-heavyweight division.

The Swede hasn’t won since 28 May, 2017. He is currently on a three-fight skid, and will be hoping to regaining his old form back, come the 4th of September.

It is worth noting that UFC 266 is the planned event on the 4th of September. It is headlined by a light-heavyweight title fight between Jan Blachowicz and Glover Teixeira. 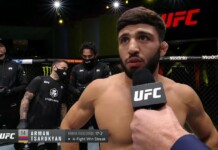