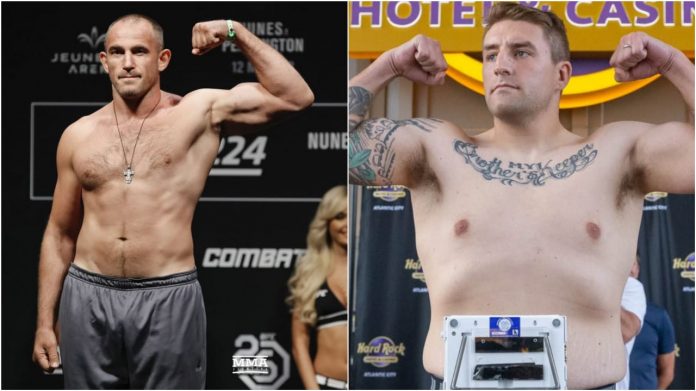 The third fight of the main card event UFC Vegas 19 was a heavyweight bout between Aleksei Oleinik and Chris Daukaus. Aleksei Oleinik is a long-time UFC heavyweight fighter previously having a record of 59-15-1 colliding with the American big man Chris. The Russian came into the fight looking to get a win after his defeat to title contender, Derrick Lewis in his previous bout. Chris on the other hand was looking to continue from the victory against Rodrigo Nascimento Ferreira last October at UFC Fight Night 179.

Round 1: Daukaus wasted no time and started the fight with a quick uppercut and an overhand right. Oleinik saw Daukaus coming in hot and tried to divert his plan of action by trying to take him down. Aleksei immediately moved to the clinch. He locked down the right arm and managed to squeeze in a few underhands. Oleinik looked to get a grab of Chris and take it to the mat. The Russian tried to grab his arms and head to the floor. Daukaus threw punches away looking to counter Oleinik’s takedown. After a flurry of punches and some struggle Chris manages to get back on his feet.

As Daukaus’ corner yells at him to avoid the Russian’s kick, big punches are exchanged between the two. Daukaus doesn’t hold back and lands clean elbow shots followed by a strong knee. The long-time heavyweight fighter is struck badly and is rocked. Aleksei was not trying to counter Daukaus at this moment as he eats a line of Daukaus’ punches.

Oleinik is hurt badly but doesn’t show it as he barely manages to stand straight. Another knee by Daukaus. Aleksei is surprisingly on his feet even though he was not in a state to counter. Chris’s punches are landing too clean and the game is over. As Oleinik stumbles the referee Herb Dean saves him from falling.