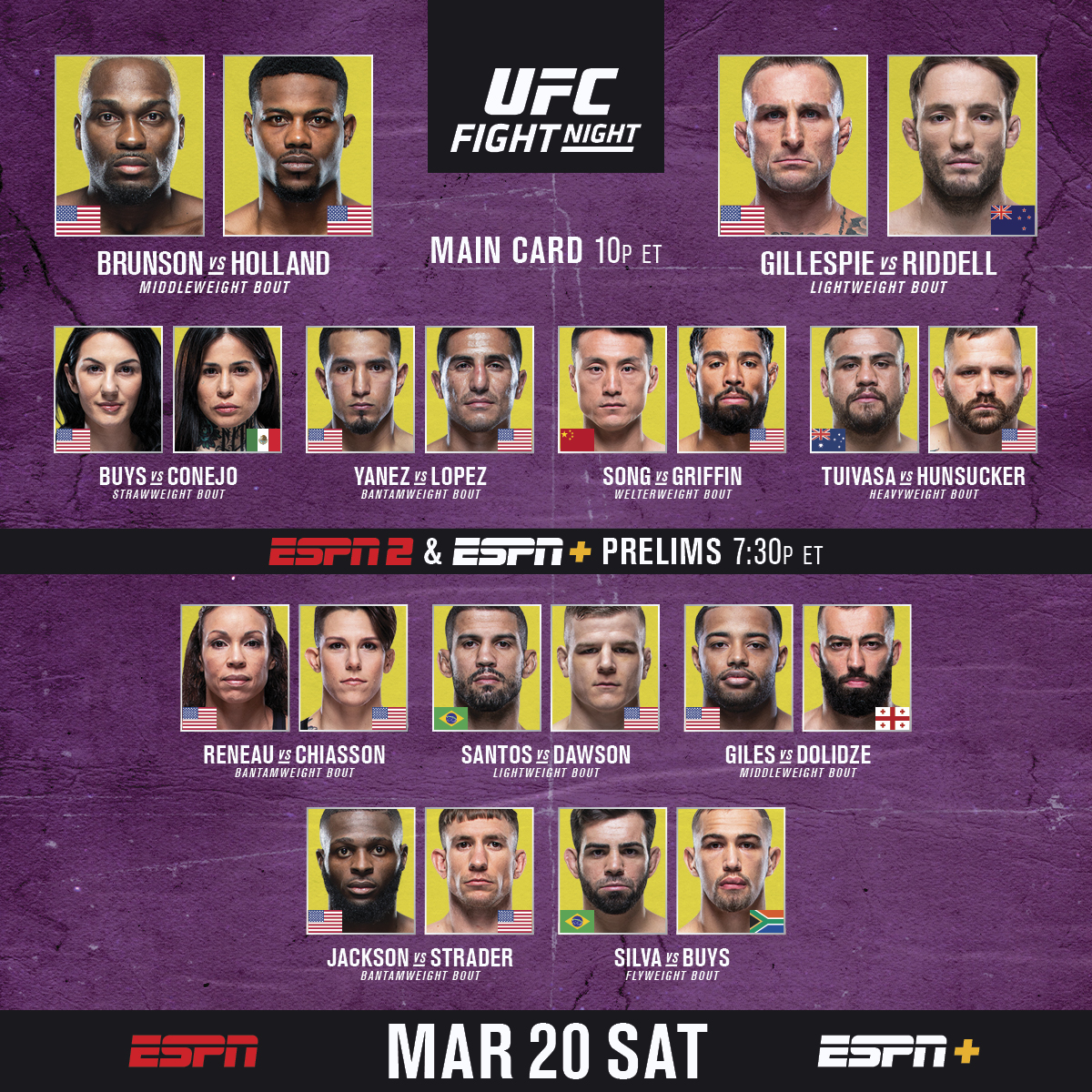 The main event of UFC Vegas 22 is headlining the Middleweight contest between number 7th ranked Derek Brunson and number 10th ranked Kevin Holland. Along with this, the fight card holds many great fights in the prelims card. Here is the result for Derek Brunson vs Kevin Holland prelims results.

Round 1: Reneau moved to her right at the start of the round and landed a nice kick to the body. Chiasson with a high kick that is blocked by Reneau. Chiasson started to move and land some nice shots whenever she sees an opening. Reneau lands a clean strike to the head. Chiasson lands a spinning leg kick just as the horn sounds.

Round 1: Dawson landed an high kick early at the round but blocked by Santos. He shoots from the range and Dawson stuffs it. Dawson fakes a shot and punches at top. Santos sneaks a right hand and Dawson answered with a clean shot. Santos lands a few short punches and Dawson landed a nice kick to the body. Dawson ended the round with a little damage around his eye.

Round 2: Dawson landed an early right hand at the start of the round, Santos switched stance and landed a leg kick. He founding some success with his shots now. Dawson landed some more kicks to the body. Santos dragged him to the canvas and Dawson quickly gets to his feets. Capoeira kick from Dawson to end the round.

Round 3: Santos kept Dawson busy at the start and Dawson landed a crisp lead hook. Santos landed a knee and Dawson continued to look for takedown. Dawson lifts Santos into the air and slams him on the canvas. Santos turned to get free but Dawson just grinded him down and Dawson landed some vicious shots and the fight is over just as the horn sounds.

Round 1: Dolidze started the round and he kept his distance early looked for opportunities to stick and move. He fired some kicks to the legs to Giles and Giles let it go. Giles lands a backfist after a wild kick missed. Dolidze scored a takedown. Giles turning his feet avoiding the danger position. Knees traded at the end of the round.

Round 2: Dolidze lands a knee at the start of the round, Giles lands a right hand over the top. Giles turned a little aggressive, Dolidze smiled at him and switched stance. Dolidze wanted to land the knee again but missed. Giles stayed patient and lands strikes when Dolidze is in the range.

Dolidze tried to take Giles down once again but he stands straight. Giles landed a few hammerfists from the top and Dolidze finally took him down but the round ends.

Round 3: Dolidze again started the round with few low kicks. Straight right from Giles and Dolidze is down on the canvas but he get up fast. Dolidze landed some body shots and Giles looked tired, Dolidze’s left eye busted open. Giles tags him with some more punches and the horn sounds.

Round 1: Early low kick from Strader to start the fight. He moves left and hits the mark again. Jackson moves towards right and lands a one of his own. Big right hand lands for Jackson. Strader hits the canvas, Jackson tried to grab the neck but Strader survives.

He’s not fully recovered, Jackson sees an opening and lands a clean one-two combination and few more punches on the ground and this fight is over!!

Round 1: Silva started the round with an early low kick. Punches and kicks traded, Buys tried a leaping kick and is pushed to the floor. Silva tried to advance but Buys keeping his defenses tight. Silva is able to pull away and move to the center and lands a crisp uppercut.

Silva moves the action to the fence once again and lands another big right.

Round 2: Buys again slips on a strike and falls to the his back at the start of the round. Silva settles on the top but he’s unable to advance. Silva attacking with low kicks. Buys landed a crisp elbow and Silva lands a huge shot. Buys falls to the canvas.

He gets up and try to survive but Silva lands one more lethal strike and Buys is down again. It’s over Silva won.

Also Read: Robert Whittaker got some new tricks in his sleeves to beat Israel Adesanya