The opening fight of UFC Vegas 41 fight card features a Light Heavyweight contest between Nicolae Negumereanu and Ike Villanueva. Negumereanu made his UFC debut against Saparbeg Safarov at UFC on ESPN: Till vs Masvidal. He lost his debut fight but after that secured a win against Aleksa Camur in his last fight at UFC Fight Night: Korean Zombie vs Dan Ige.

Villanueva on the other hand is going to make his third appearance inside the Octagon this year at UFC Vegas 41 and he is coming into this fight with a loss against Marcin Prachino in his last fight on UFC Fight Night: Gane vs Volkov.

Round 1: Both men rush out to trade shots with each other, Negumereanu doesn’t take long and pressed Villanueva against the cage. Villanueva defends himself they come in the center. Both men traded some heavy shots and Villanueva drops to the canvas.

Negumereanu lands hammerfists, Villanueva complains the punches were back on his head but no immediate call is made and the fight ends.

The fight didn’t even last for two minutes and Nicolae Negumereanu ended the veteran Ike Villanueva with some blazing shots. only question is that was those shots really behind the head, well any immediate decision wasn’t taken by the referee but it looks on the back of the head. 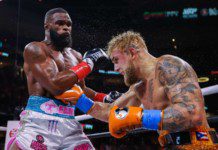