Paulo Costa shows that he is a “man of culture” as he hilariously quotes UFC superstar Conor McGregor in his post-fight press conference at UFC Vegas 41. The Brazilian has been a treasure for memes among the MMA community since the entire lead-up to his fight against Marvin Vettori.

Paulo Costa once again proves that he is a gift that keeps giving. After a very puzzling lead-up to his fight against Marvin Vettori at UFC Vegas 41, Costa got the MMA fans rolling with his Conor McGregor quote in the post-fight presser. Costa was scheduled to fight Vettori in a middleweight matchup but the Brazilian failed to make weight and instead made Vettori agree to fight at light heavyweight. Vettori being the warrior he is still won the fight against a heavier Costa in the main event via unanimous decision.

In the post-fight press conference after his fight, Costa was asked how he felt after the fight and the Brazilian channeled his inner “Notorious One”. “No, physically I am good. But my foot is a….balloon. My foot is a Ballooon,” said Costa cracking himself up with his meme reference.

“My foot was a balloon” quote is one of the many McGregor one-liners that have caught on among the MMA fans. In 2019, Conor decided to sit down with ESPN’s Ariel Helwani for an interview after his loss against Khabib Nurmagomedov at UFC 229. When Ariel asked him about his injury, Conor was caught saying, “My foot was a balloon” several times.

After joking about his foot, Costa got serious and questioned why he was deducted with a point in the very second round. In the second round of the fight against Marvin Vettori, Paulo was caught poking the eye of the Italian which led to a restart. The referee at the moment felt the eye poke was dangerous and decided to fine Costa with a point from his scorecard.

In Costa’s defense, he believes it was only the first stoppage of the fight and it deserved nothing more than a warning. “I really believe I won. About the referee, I don’t understand why the referee took one point at the very first stoppage. Vettori hit my balls but I didn’t ask to stop fight,” said ‘The Eraser’ talking to the media.

Watch Costa’s funny Conor reference and his reaction to the point deduction below:

Also read: “I don’t agree with the referees,” Paulo Costa believes he won the fight against Marvin Vettori at UFC Vegas 41 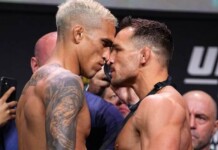