Unacademy has been declared as the Title sponsor for upcoming Ind vs Sl ODI series which is scheduled from 13th July. The ODI series will be followed by 3 matches t20 series for which CoinDCX will be taking the leads as the Title Sponsors. Title sponsors have shown huge interest in this series. Though the senior team is busy in its preps for their upcoming Tests against England, Unacademy and CoinDCX coming to support a second-string Indian team touring Sri Lanka is a very great thing which denotes the huge support and belief both the sponsors have shown.

Other than this Dream11 & Skoda will be the Co-Powered by Sponsors for both the T20 and ODI series. Not only the ground sponsors, but the series is also attracting decent traction for ON-AIR Sponsorships. The official broadcaster of the series is going to be Sony Sports Network. Sony Sports will broadcast the 3 Match ODI and 3 games T20 series in multiple languages & at least 4 to 5 channels. Other than this SonyLIV will be live streaming the series starting from 13th July.

Shikhar Dhawan will be captaining this young side for this much-awaited series against Sri Lanka in Sri Lanka. The Indian team will have the likes of Hardik Pandya and Bhuvneshwar Kumar as the senior players. There are some new faces too including Devdutt Paddikal who impressed everyone in the 2021 IPL. He scored a brilliant Hundred against Rajasthan Royals to batting along with Virat Kohli. Some other key players to watch out for are Suryakumar Yadav and Ishaan Kishan who have already debuted in the series against England. Kuldeep Yadav will be making a comeback who might be hoping for a potential chance in the playing 11 as he just warmed the seats during the recent IPL for the KKR side.

Ruturaj Gaikwad will be coming In red hot form from IPL 2021. He will be expecting to get a chance to open along with Shikhar Dhawan, however, the chance is too low when you have Prithvi Shaw ready to blast with his recent form. The Mumbai captain took the Vijay Hazare Trophy 2020-21 by storm with back-to-back superlative performances in the domestic tournament. Nitish Rana and K Gowtham will be looking to gain as much experience as possible as they might not get a single chance in the series. Who knows even a single person’s loss is another man’s opportunity. In case of injuries, they might be hoping for some turnaround.

Sanju Samson will be the second option for Wicket Keeper after Ishaan Kishan who will hope to get some runs too if given a chance. Varun Chakravarthy is the Mystery spinner India has added into the lineup. However he was selected previously too, but due to nonclearance of Yoyo Tests, he was rejected from the services. Bhuvi will be the Vice-Captain and Deepak Chahar will be his Partner in Crime. The duo will try to swing the ball in both directions and making the Sri Lankan Batsman Work Hard even for a single run. Let’s have a look at the Indian Lineup for this much-awaited series

Ahead of the white-ball series, The Board of Control for Cricket in India shared pictures from the game, showing the team hitting ‘high energy’ with ‘full-on intensity.

In a video posted on bcci’s Twitter page, bowling coach Paras Mhambrey recapped the game. Ruturaj Gaikwad made 30+ runs while Manish Pandey made the match’s highest score of 63. Suryakumar Yadav made a half-century while Devdutt Padikkal and Prithvi Shaw had a 50+ partnership.

How do I watch live streaming of the India vs Sri Lanka Series? 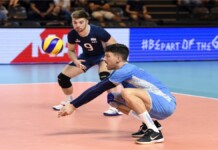