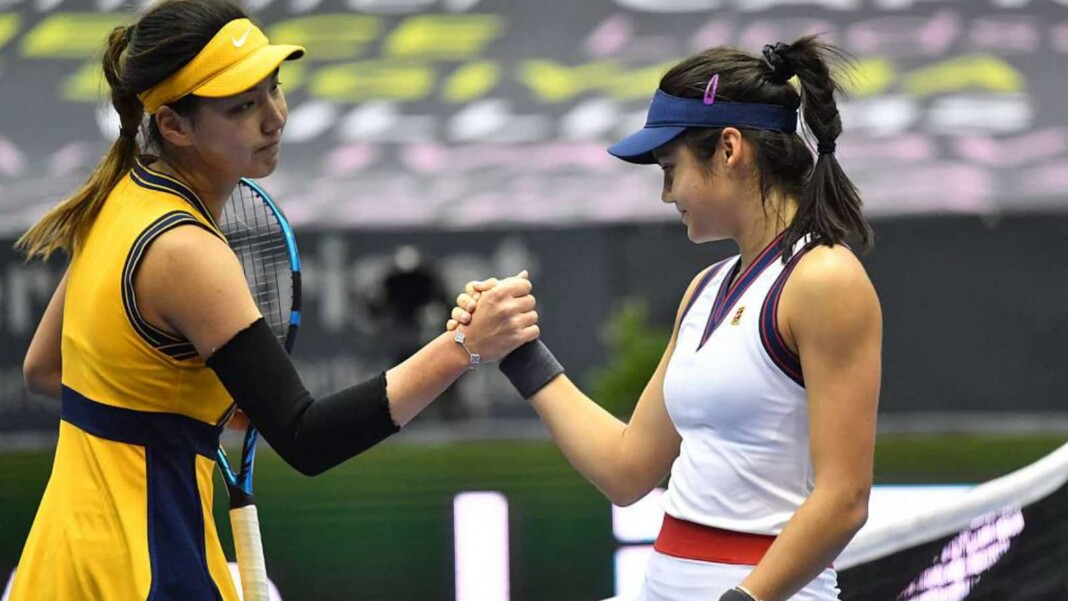 Unseeded Chinese, Wang Xinyu caused an upset at the Linz Open on Tuesday as she took out U.S. Open champion Emma Raducanu 6-1, 6-7(0), 7-5 in an absorbing three-setter Round of 16 clash to book her place in the quarterfinals of the WTA 250 event in Austria.

The 18-year-old top seed Raducanu, stunned the tennis world in September when she became the first qualifier ever to win a major, however, this defeat brings the curtain down on Raducanu’s breakthrough season in tennis.

Playing in just her third tournament since her US Open success, the British teenager, now ranked 20 in the world, struggled against the 20-year-old Chinese who got off to a blistering start and clinched the opener in just under half an hour as her deep returns forced the top seed into several errors.

The Briton was far from her most fluent in the second set but made short work of Wang in the tie-break which she took to love as she won 10 points in a row. Wang, however, stayed with her in the decider, breaking to go 5-4 up after which Raducanu took a medical time-out for treatment for a hip spasm.

Emma Raducanu picked herself up to save two match points and level at 5-5 but again failed to hold, allowing Wang to take her second opportunity to serve out the match, closing it out after two hours and 36 minutes on court.

Raducanu came into the match as the top seed but it was Wang who made all of the early running in Linz. Wang next plays Alison Riske in the quarter-finals, who defeated eighth-seeded American Alizé Cornet.

“A lot has happened this year”, says Emma Raducanu who was happy with the level she put out on court

It marked another disappointing day at the office for Emma Raducanu who has been without a coach since parting company with Andrew Richardson shortly after her triumph at the US Open in New York. The British teenager was emotional yet gracious in accepting her defeat to a better player as she acknowledged the fact that her body still needs physical development. Nevertheless, Raducanu was content with her spirit to fight back against the Chinese.

“A lot has happened this year. Where I was in January, February, March, I would have taken it. I have learned how much room I have to develop physically and what playing on the tour week in, week out actually needs because clearly, my body is still trying to get up to speed. I was honestly quite happy with the level I put out and tried to fight back”, she said

Emma Raducanu went on to mention the fact that she is craving a getaway as it’s almost been close to a decade since she went on a holiday. “I haven’t been on a holiday for seven years, so it would be nice to have an opportunity to go somewhere.”

Raducanu addressed the appointment of German Torben Beltz as her new coach after the defeat. She has been without a coach since parting company with Andrew Richardson shortly after her triumph in New York. “It’s obviously a great privilege to be working with such an experienced coach. I’m definitely very excited to work with him throughout the pre-season and into next year”, said the US Open champion.

Beltz, who recently split with compatriot Angelique Kerber, led the former world number one to the Australian Open and US Open titles in 2016. The inexperienced Radacanu can definitely use the experience that Beltz has to offer in order to grow and win titles on the tour in the near future.

Also Read: ‘The search is over’ Emma Raducanu to announce Torben Beltz as her new coach