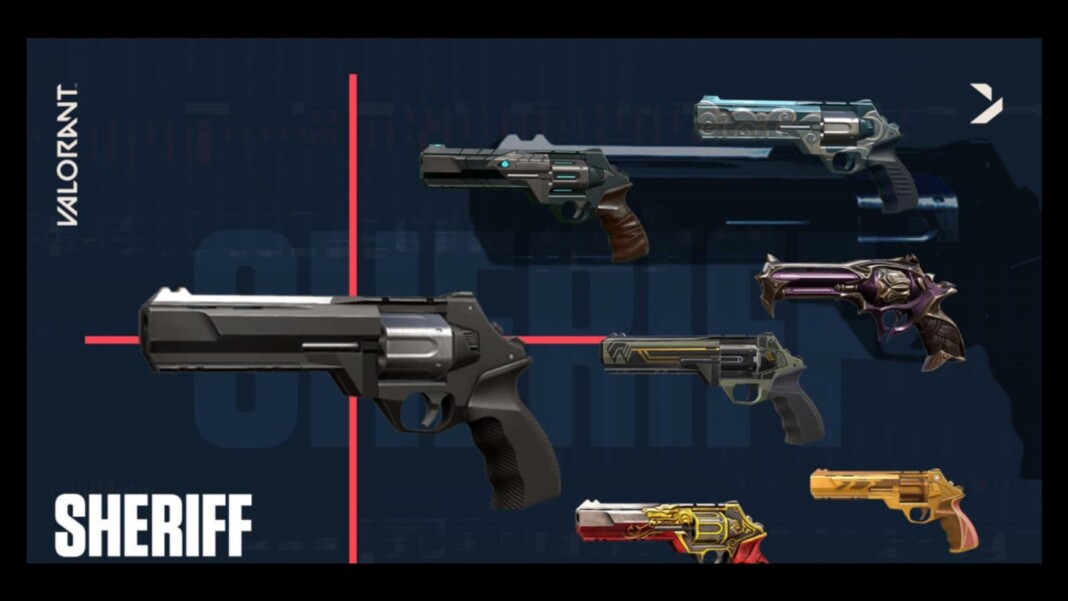 Valorant Best Sheriff Skins: Riot Games made the tactical shooter called VALORANT which is a 5v5 character-based FPS game where precise gunplay meets unique agent abilities. This ability-oriented tactical shooter is currently only available for the PC platform and showcases a wide variety of skin line collections, including both Animated, VFX infused, and normal skin lines. The article lists the VFX and animation-infused Top 5 Best Valorant sheriff skins you should definitely get to jazz and notch up a game ahead of both your gun and gameplay.

These skins are far from the already existing ones, they look like scrappily put together weapons used by rebels in a future dystopia. The collection has a futuristic DIY feel, think Mad Max and if they are proven to be on the cheaper end of skins they will be a popular pick.

The latest bundle is now available in the VALORANT shop and will cost players around 8,700 VP or roughly $83. Players will also be able to purchase individual skins from the bundle for 2,175 VP, except the melee, which costs 4,350 VP. includes skins for the Vandal, Operator, Sheriff, Ares, and melee slot. This contrasts the Ruination skin line, which was for the Phantom, Guardian, Spectre, Ghost, and melee slot.

“Forged at the edge of darkness and revered for its power, humanity’s last hope is in your hands with Ion.” is as RIOT describes Ion. The new skin bundle contains skins for the Phantom, Sheriff, Bucky, Operator, and Melee featuring a white and blue futuristic theme that sci-fi fans would adore. The Ion bundle will cost 7,100 Valorant Points (VP) to get the whole package.

Coming from as past as the beta version, the Reaver collection, although with a few moderations in finisher and textures, has owned back its place. A popular bundle since the beta was released, Reaver dates back pretty much in the game but the latest introduction of it to the game could not have been better. The Reaver skin is dark, moody, and will send enemies to the underworld. the finisher has changed since the beta version, but still, a hollow underworld spiral can’t get any better!

Having released alongside Act 3, the Singularity Bundle with its purple hue and low-key design is a favorite of many. “Singularity exists in a far future, vast in its journey from the beyond. Powerful, abstract, and mysterious. None know where it came from or how it came to be,” explained Riot Games in a press release. This weapon collection will include skins for the Sheriff, Spectre, Ares, Phantom, and Knife.