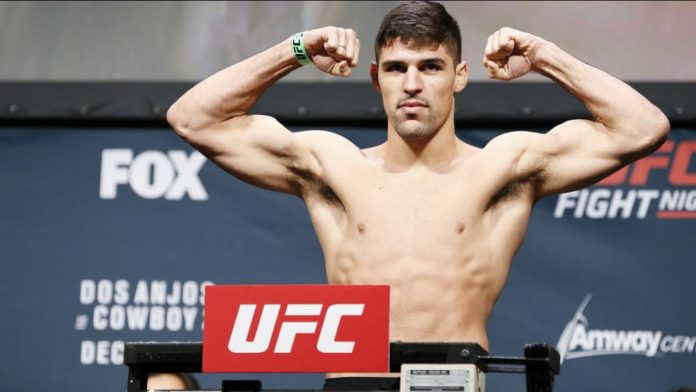 Vicente Luque earned a stunning win over Tyron Woodley at the recently concluded co-main event at UFC 260. The Brazilian won via. first-round submission after an explosive start from both the fighters, with Woodley rocking Luque very early into the fight. Despite getting rocked early, Luque then picked the pace and submitted Woodley via. a D’Arce choke. The win propelled him to number 6 in the welterweight rankings.

Speaking in an interview with BJPENN.com, Vicente Luque was very pleased with the way he went about with the fight. He revealed that he sniffed victory, as soon as he hurt Woodley and went on for the finish.

Luque was quoted as saying, “I wasn’t rocked. It just took my balance. I tried to hit him with an elbow as he threw a right hand. It landed behind my ear and that took out my balance for a second. I was seeing three of him for a few seconds which is why I took time to recover. I knew he was trying to get the KO so I hit him with a good counter and hurt him. Once I hurt him, I realized I could finish him.” [via BJPENN.com]

He added, “He can take a lot of damage and took some heavy shots. But, once he dove for a single leg, I saw an opportunity to get a D’Arce and I knew I could’ve knocked him out but I went for the submission instead. It was a big and decisive win. It sent a message to the division that I was able to work on my grappling.” [via BJPENN.com]

Vicente Luque was recently disappointed that he did not get to fight Nate Diaz, as the UFC returnee was paired up with number 3 ranked Leon Edwards, for his comeback fight. And, now it looks like Luque will have to wait for a while before he is paired up with an opponent.

Who do you think Vicente Luque should face next?