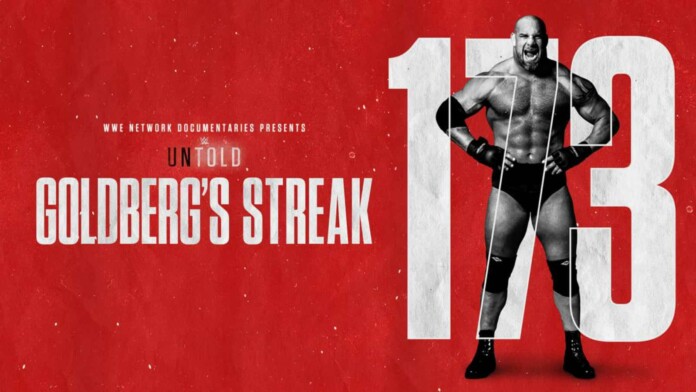 The New York Festivals TV & Film Awards have nominated three highly celebrated WWE documentaries as the finalists of their upcoming ceremony. The three of them are WWE 24: Edge – The Second Mountain, WWE Chronicle: Jey Uso, and WWE Untold: Goldberg’s Streak.

The winners are scheduled to be announced at the Storytellers Gala honoring Radio and TV & Film Awards on Tuesday, October 12, at the NAB show in Las Vegas. This is indeed a prestigious feat achieved by the WWE and the organisation took it to Twitter to announce the honor.

Details about the 3 WWE documentaries

This documentary on the Rated R superstar had been hailed as one of the best things the WWE has ever done. The documentary is a perfect tribute to the superstar and is filled with moments of goosebumps and tears. The amazing work done by the production team was premiered on April 5, 2020, after Wrestlemania 36 night two. The subject revolves around his life after wrestling as he had given it a thought to be back in the ring after doing bike stunts in shows like ‘Vikings’ or after his mountain bike incident with Sheamus.

There are a lot of things that make this documentary so special for the fans. Starting from his relationship with his wife, Beth Phoenix, and his family to the road back to Royal Rumble, everything is beautifully covered. It also gives us an insight into the Randy Orton program which was amazing work done by the creative team. Another notable mention in the project is its worthy soundtrack which perfectly fits every scene making the emotions resonate with the fans. Overall, Edge – The Second Mountain is a show, a WWE fan cannot even dream of missing as it covers a life of a superstar who has been a legend, to say the least.

The second nomination for the New York Festivals TV & Film Awards, this documentary on the life of Jey Uso is nothing short of excellent. It beautifully covers the superstar’s past, present, and future which are all connected to the world of wrestling. Jey is the son of the WWE Hall of Famer, Rikishi, who has an appearance in the film. The documentary also features Jey’s two sons Jeyce and Jaciyah and also has some of Jey’s rich childhood footages.

The beautiful relation between Jey and his wife Takecia, who the superstar believes to be the backbone of his family, is covered in the film along with every sacrifice he has made to gain momentum in the world of wrestling. The main attraction, though, is the meaning behind his epic match with Roman reigns who is a cousin to Uso. The behind the scene footages of Uso and his family and scenes leading up to that epic clash are absolutely spine-chilling.

Out of the three engaging documentaries, this one might just be the fan favorite as even non-wrestling fans are aware of who Goldberg is. It is an amazing work done by the WWE with interviews from Hulk Hogan, Kevin Nash, Diamond Dallas Page, and the man himself, Goldberg. What makes the film such a wonderful watch is the commentary on the 90’s footage the pops off the screen and the organic reaction of the crowd to Goldberg’s run.

Goldberg in his starting interview speaks about how he left the world of football to begin his wrestling journey. And the man confidently utters the line “And every one of you will be lying if you said you didn’t want to see it.”Though Goldberg has not enjoyed much success in recent times, Goldberg in his earlier days was a beast somebody had never seen before. The film also explains the decision to give every Goldberg’s appearance a big match feel including the bodyguard chants and the pyro. On the whole, this one is nothing short of a 48-minute thriller for every sports fanatic to be glued to their TV sets.