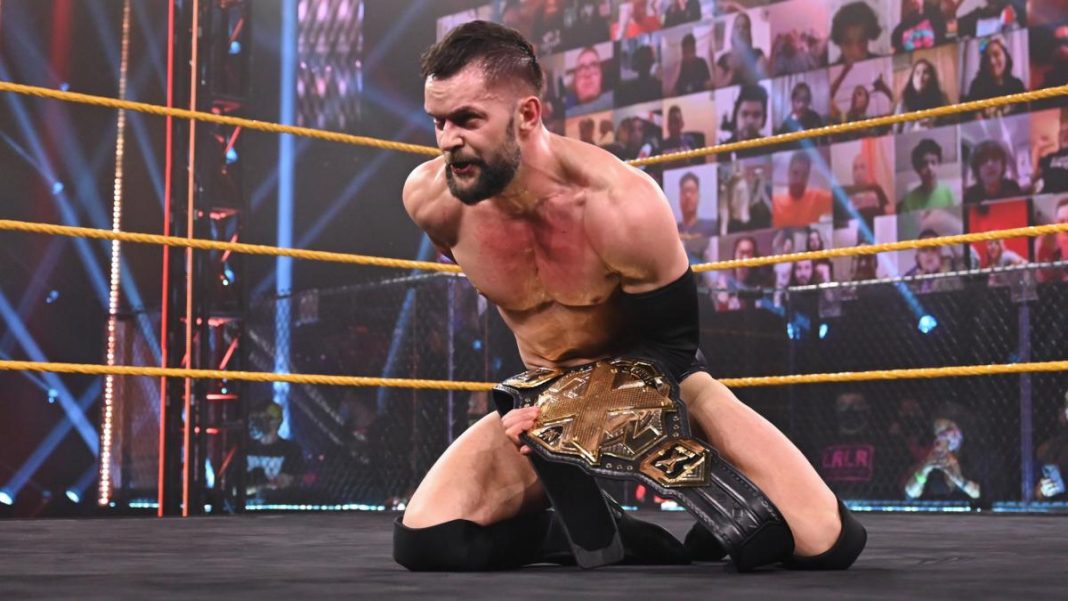 This episode of WWE NXT was scheduled to feature two TagTeam Championship matches. But due to an injury to Wes Lee on MSK, the NXT Tag Team Titles were pulled off the card.

Thatcher started against Danny Burch. The Thatch-as-Thatch-Can instructor seemed to hold the upper hand over the veteran in the early stages of this match. Burch evened things up with some right hands.

Ciampa and Lorcan were tagged in, with Lorcan pelting the former NXT Champion with some nasty uppercuts. A back elbow rocked Lorcan and set him up for a running knee that launched him into the barricade. Ciampa was able to turn Lorcan inside out with a lariat.

A half-hatch suplex dropped Burch as Thatcher locked in a sleeper hold. Lorcan kicked Thatcher in the jaw, but he didn’t break the hold. Thatcher and Ciampa beat the champs in tandem before the former NXT Champion applauded his partner for his grit.

Lorcan saved Thatcher from a German and knocked Ciampa off the mat. One-Two’s Elevated Impaler DDT was blocked, leading to a four-way brawl. Imperium appeared on the stage, distracting Ciampa and Thatcher long enough for the former Evolve Champion to be dropped with that Impaler DDT.

Last week on NXT, Adam Cole betrayed Strong. He demanded an explanation from Cole. But WWE NXT Champion Finn Balor walked out instead. Strong blamed him too. He said that everything was fine with Era, until Balor arrived.

The lure of the title broke up their brotherhood. Balor mentioned that he will be putting his title on the line against Adam Cole. But Strong will always be a follower not a leader. He lacked the killer instinct, and Strong started assaulting him.

The Way were worried about Theory and took him for therapy. Theory was kidnapped by Dexter Lumis, and Gargano believed that he wasn’t the same since. But Theory mentioned that he and Lumis actually became friends. Indi Hartwell was still infatuated by Lumis and called herself “Mrs. Indi Wrestling Lumis.”

Gargano kept on trying to convince everyone that Lumis was a monster. But the therapist kicked him out.

Robert Stone was experiencing some flashbacks after seeing Shotzi Blackheart and Ember Moon arrive in the tank. Moon responded to Aliyah’s attacks with a spiking release back suplex. They brawled to the floor, but Stone distracted the former NXT Women’s Champion. A roundhouse and running boot laid out Aliyah, leaving Stone and Jessi Kamea nervous.

Aliyah caught Moon with a nasty running boot in the corner. A running dropkick and spinebuster onto Aliyah, as Moon picked up the win.

Kai avoided Baszler’s join dislocating elbow stomp as the match began. Baszler looked to work in some joint manipulation, but Gonzalez was just too strong. Gonzalez brought Kai back in for an assisted flying double foot stomp, but Baszler kicked out.

Nia Jax and Baszler kept Kai on their half of the ring as Gonzalez was begging for the tag. But she was able to break away with a jawbreaker, allowing Gonzalez to bulldoze Baszler. Gonzalez launched her into the corner, allowing Kai to follow up with another running boot.

Shayna locked in the Khirifuda Clutch again, but the ref was still down from a shove, early in the match. WWE official Adam Pearce appeared with a referee, who called off the match. This was a controversial end to the match, considering Kai was not tagged in to be the legal wrestler.

This was L.A. Knight’s first appearance, since he showed up at NXT TakeOver: Vengeance Day. He said that some people called him the Tom Brady of wrestling, but Brady wished he was half the man Knight was.

He did not show up at the top but he will set records and become the greatest of all times. L.A. Knight will be taking over NXT in no time.

Grimes tried to buy off Reed, but The Colossal One declined the offer. He hit a big senton onto Grimes for a near-fall. But Grimes countered with the Collision Course.

Reed stomped the hands of Grimes and continued to kick him. Reed crushed Grimes with a body splash, followed by a clothesline. Grimes attempted to leave the ring but was hit by a suicide dive. A distraction from L.A. Knight allowed Grimes to catch him with the Cave In for the win.

As the match began, Balor attacked Strong’s left arm. But Strong countered with a backbreaker. Strong unloaded on the Prince of NXT and hit a pendulum backbreaker for a two-count.

Balor ducked a knee strike, sending Strong’s knee into the top turnbuckle. The NXT Champion followed up with a modified crossface, but Strong made it to the ropes.

Roderick Strong got back in the match with the Olympic Slam and powerbomb. Balor countered with a leaping double stomp.

Balor sent Strong into the corner with the shotgun dropkick and set up for the Coup De Grace. Strong couldn’t avoid it, and the 1916 DDT followed up, as Balor picked up the win. Adam Cole was standing on the ramp, as Balor posed with his title.

Prateek Athanur - April 11, 2021
Darren Till took to Twitter to talk about his 'frenemy' Mike Perry after the devastating loss against Daniel Rodriguez at UFC Vegas 23. 'The...