WWE NXT Spoilers, Preview and Predictions: The NXT 2.0 has been constantly struggling with declining ratings. While the company is only seeing this as a short-term decline, WWE will surely try to win back the fans with some surprising elements. Two Championships are going to be on the line, and we might see one title change hands on the rebranded NXT.

The NXT Championship is going to be on the line after Joe Gacy answered Tommaso Ciampa’s open challenge. Gacy is looking to make Halloween Havoc a safe space. Considering the momentum that Ciampa has, and with no real heat with Gacy, this might be a squash match.

Santos Escobar finally gets his much awaited rematch for the North American Championship. Swerve has not been seen enough on NXT since winning the title, whereas Escobar has made regular appearances. WWE has also been pushing Escobar’s stable – Legado del Fantasma, especially since Elektra showed up. Considering all these factors, we might witness a change of hands for the title.

Weeks after weeks, Kyle O’Reilly was being attacked by Pete Dunne and Ridge Holland. Finally an ally has showed up for KOR, in the form of Von Wagner. Wagner seems like a dominant force and WWE could push this team in order to get the fans behind them. 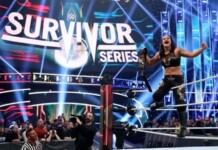