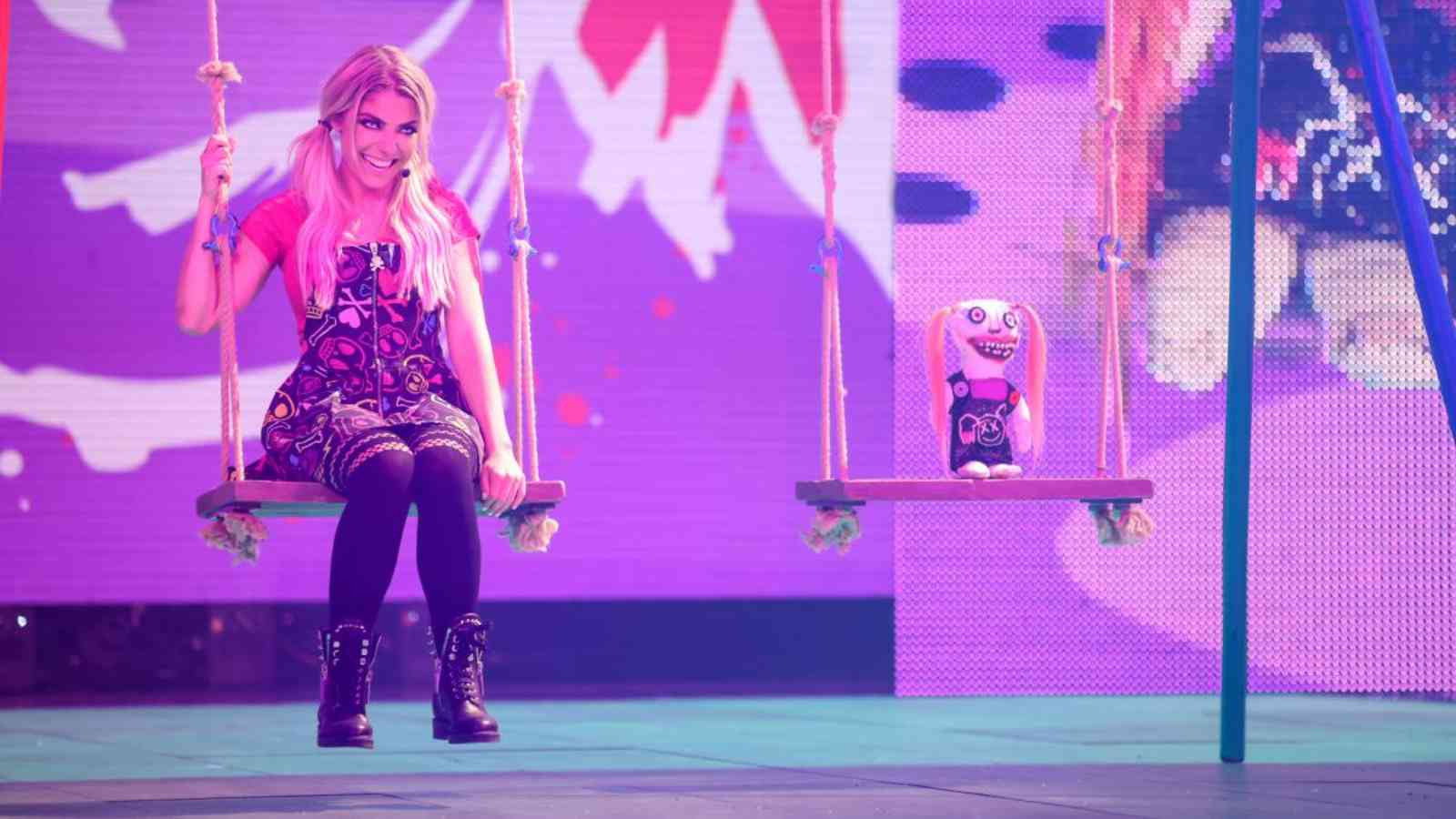 The show kicked off with a recap of WWE Champion Bobby Lashley’s match against Braun Strowman, last week. Drew McIntyre got involved in the match and will face Lashley.

Nia Jax started against Mandy Rose. Jax stomped her in the corner. Shayna Baszler tagged in and applied an arm bar. Rose quickly powered her up and sent her to the corner. Asuka tagged in and went for a German Suplex on Baszler, but Baszler blocked it.

Alexa Bliss’ music hit. Bliss was on a swing set on the stage with Lilly on the other swing. Bliss said she and Lilly are there to keep an eye on… someone. Bliss laughed.

Flair stomed Rose in the corner. Baszler tagged in and attacked Rose. Jax applied a chin lock, but Rose fought back up. Jax went for a Samoan Drop, but Rose slid off. Brooke knocked Flair off the apron and attacked Baszler.

Brooke hit a handspring back elbow followed by a bulldog while Baszler hit a wild backbreaker. Baszler’s knee gave out. Asuka tagged in, knocked Jax off the apron, and hit a sliding kick on Baszler for the win.

Mahal returned to WWE Raw with Veer and Shanky alongside him. As the match began, Hardy attacked Mahal with a dropkick. Mahal tried to reverse a whip, but was kicked in the head.

Mahal connected a vertical suplex and kneed Hardy in the back before applying a chin lock. Hardy fought back and took him down. Hardy removed his shirt and went for a Twist of Fate, but Mahal kneed him in the face followed by a Khallas for the win.

Elias started off against Riddle. Riddle went for a monkey flip, but was countered into an arm bar attempt. Jaxson Ryker tagged in, but Riddle took him down. Ryker avoided a kick as Omos tagged himself in.

Riddle tried to fight him, but Omos simply threw him away. Omos blocked a kick. Xavier Woods ran in and got immediately taken down. Kofi Kingston ran in, but Omos head-butt him down. Randy Orton slid into the ring and looked at Omos before rolling back out.

AJ Styles tagged in. Ryker connected with a back suplex onto Riddle. Styles tried to follow up with a suplex on Riddle, but he got out and tagged Kingston in. Kingston kicked away at Styles. Woods tagged in and hit a flatliner.

Riddle kneed Elias in the face and hit Ryker with an exploder. Riddle knocked Styles off the apron. Randy Orton tagged in. Woods hit Styles with a baseball slide. The New Day spin Styles around outside, distracting Omos. Orton hit Elias with an RKO for the win.

After the match Orton hits Woods and Kingston with an RKO. He goes to Riddle as well but stops. Riddle smiled as Orton walked off with a smirk.

Sheamus got on the apron, so Carrillo hit a springboard dropkick. Carrillo went for a baseball slide, but Sheamus countered and slammed him on the floor. Sheamus sent Carrillo into the timekeeper’s area.

Sheamus got Carrillo on his shoulders and climbed to the second rope. Carrillo elbowed him off and hit a hurricanrana. Carrillo followed it up with a sunset flip powerbomb to the floor. Sheamus landed right on Carrillo’s legs. Carrillo couldn’t get back to his feet. The referee noticed something was wrong with Carrillo and called the match off.

Benjamin went for Pay Dirt, but Alexander countered into a roll-up. Alexander hit a Neuralyzer and shouted that he is the best. Alexander talked trash and ripped at Benjamin’s face. Benjamin surprised Alexander with a t-bone suplex for the win.

Ripley quickly attacked but Asuka fought back and went for a backfist, but Ripley avoided it. Ripley mocked Asuka, so Asuka swept the feet and dropkicked her. Asuka threw Ripley across the ring. Charlotte Flair’s music hit, and she walked out to the stage.

Asuka dropped Ripley with a spinning backfist. Ripley dropkicked Asuka and shouldered her in the corner. Asuka kicked Ripley back and hit a sliding knee. Ripley grabbed Asuka and head-butted her. Flair said Ripley was learning from her.

Ripley hit a northern lights suplex.  Asuka hit a double knee facebuster as Ripley got knocked out of the ring. Asuka hit a missile dropkick but Ripley fought back and hit the Riptide for the win.

The winner of this match will determine the stipulation for Damian Priest vs. The Miz at WrestleMania Backlash this Sunday.

Morrison forearmed Priest in the face as the match began. Priest knocked Morrison back and stomped him down in the corner. Morrison applied a chin lock, while Miz hyped up Morrison at ringside. The Miz pulled Morrison out of the ring and talked to him.

Morrison distracted the referee while The Miz hit Priest with a big boot. Morrison got Priest in the ring and applied a chin lock. But Priest punched out of it. Priest continued to fight and hit a spin kick off the top rope.

Damian Priest chooses a Lumberjack match against The Miz at Wrestlemania Backlash.

McIntyre hit a delayed vertical suplex. MVP shouted encouragement to Lashley. Lashley drove his forearm into McIntyre’s face. McIntyre got on the apron and Lashley hit a neck snapper. Lashley went outside and put McIntyre on his shoulders before driving him headfirst into the ring post.

McIntyre hit a hip toss into the turnbuckles. They traded blows before McIntyre hit a pair of overhead belly-to-belly suplexes. McIntyre connected a big neckbreaker. McIntyre went for a Future Shock DDT, but Lashley got out.

Strowman got back into the ring and screamed at McIntyre. He hit him with a Running Powerslam too. Strowman ripped his shirt and stood tall in the ring, as the show ended.