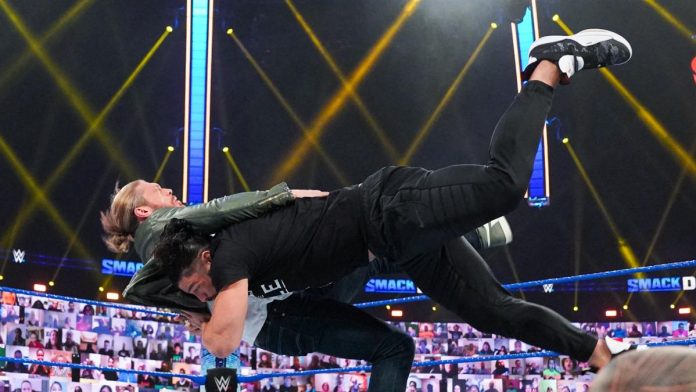 This was the go-home show of WWE Smackdown for the Elimination Chamber. 2021 Royal Rumble winner Edge appeared again on the show.

The Rated-R Superstar made his way to the ring. He talked about the Universal Championship match at the Chamber, which will take place between Reigns and the Chamber match winner. As he was speaking, Reigns walked out with Jey Uso and Paul Heyman.

The Universal Champion asked him to pick his opponent for Wrestlemania. Edge mentioned that last week Reigns wrongly saw fears in his eyes. He knew that Reigns has realized that he needs Edge to face him, because he is insecure.

Roman is in his prime, has talent, has earned respect but he got too much too soon. He was unable to handle that. Sami Zayn walked out. He again talked about how WWE has wronged him but he managed to earn a spot at Wrestlemania.

As he was talking, Jey Uso superkicked him. Reigns handed his title to Heyman and whispered something in the ears of Edge. he backed away and left the ring with Heyman and Uso.

WWE Intercontinental Champion Big E was on commentary for this match. Nakamura kicked off the match by kneeing Crews into the face. He countered with a dropkick, sending Nakamura outside the ring.

Nakamura brings the action back into the ring, as he hits multiple kicks. He put Crews between the rings and hit a German Suplex. Apollo went for the military press but Nakamura rolled him up to pick up the win.

Crews attacked Nakamura after the match. He picked up the steel steps to attack Big E. But E told him that its over between them. Crews threw the steel steps onto Big E, who was later taken out on a stretcher.

Rollins mentioned that what happened to Big E was a tragedy. But an even bigger tragedy is what happened to him last week, when he made his return. The entire roster, whom he believed were his friends, disrespected him.

Months of planning went into that segment, but the entire roster left while he was giving his speech. Rollins and his lawyers have written a formal complaint to WWE. But the biggest loser is Cesaro, who made the entire moment about himself. Seth said they need to embrace the vision.

Tamina and Ruby started off the match. Ruby was knocked down a couple of times by Tamina. Liv was tagged in. she jumped off the rope to knock down Tamina. Natalya was tagged in.

The Riott Squad double teamed on Natalya as Billie Kay walked out to the ring. Ruby was distracted and was rolled up, but she managed to kick out. Tamina slammed Ruby to pick up the win. Kay started celebrating but was superkicked by Tamina.

The guests on the show were WWE Women’s Tag Team Champions Shayna Baszler and Nia Jax. They were standing behind the set door, but were unable to fit through it. Bayley sat on the couch and gave them only a chair.

The duo thanked Bayley for not being angry that they took off the title from her. Bayley said that she is happy that she got rid of Sasha and had her own show. They discuss that Banks was bad but Belair was worse.

Reginald walked out. He mentioned that they should not be disrespecting Banks. Sasha Banks walked out. She told Reginald to never speak for her. Everything revolves around her. Hence, Bianca will also choose to face her at Wrestlemania.

Bianca Belair walked out. all of them start arguing, as a referee is called out to officiate the match.

Bianca and Baszler started off the match. Baszler was taken down with a waist lock. Sasha was tagged in and they double teamed on Baszler. Jax was tagged in and she ran through Banks. Soon Reginald gets involved in the action and he is pushed away by Jax.

Reginald tried a shoulder block and a drop toe hold, but all go in vain. Jax goes for the big splash but Reginald moved away. He went for a crossbody but Jax caught him. She turned and was given a double dropkick by Banks and Belair. Reginald fell onto Nia to pick up the win via pinfall.

WWE Smackdown Tag Team Champions Dolph Ziggler and Robert Roode were on commentary for this match. Dominik started off against Gable, and took him out with a dropkick. Otis was tagged in and he ran through Dominik.

Rey was tagged in. he jumped off the top rope for a senton and took Otis down. Otis caught him and took him down with a splash. Gable got in the ring and advised for another splash. Referee asked Gable to leave but he did not. The Mysterios won via disqualification. Otis hit another splash onto Rey.

Edge was on commentary for this match. Jey and Bryan started off the match. Bryan dominated and tagged in Cesaro who continued the momentum further. Their opponents tried to break the momentum, as Zayn rolled out of the ring.

Sami, Jey and Corbin argued as they threw Sami back into the ring. Cesaro swung him and then swung Corbin. Zayn managed to get back in the match as he hit a blue thunder bomb. He went for the cover, but Cesaro broke it.

Corbin threw Cesaro to the outside. Owens superkicked Corbin, sending him out of the ring too. Sami climbed the top rope as Bryan hit an underhook suplex followed by a Yes Lock, as Zayn tapped out.

Bryan celebrated as Corbin hit him with an End of Days. Owens hit him with a stunner. Exploder by Zayn onto Owens. Cesaro with Uppercut on Owens. Superkick by Uso to Cesaro. Spear by Edge to Uso, and finally a Spear by Reigns onto Edge, as the show ended.