WWE Survivor Series 2021 is just a couple of days away, and this year, the event has received some serious criticism from the fans due to the absence of any form of buildup. The event is known for being the one night where the Superstars from the main roster brands collide against each other for brand supremacy.

Qualifier matches and brand invasions were the real essence of Survivor Series and all of it has been done away with this year. The members of each team for WWE Survivor Series 2021, were directly announced. But interestingly, even after removing the qualifier matches, some Superstars have already left their spots on the team.

Smackdown Superstar Aliyah, who debuted last week on the Blue brand, kicked off her journey with a massive pinfall victory. Moments later she was removed from the Women’s Team Smackdown by WWE official Sonya Deville. Similarly, last week on Raw, Dominik Mysterio ended up losing his spot to the All Mighty Bobby Lashley.

Dominik’s father and Tag Team partner, Rey Mysterio, is the latest Superstar to lose his spot on the Team for the upcoming WWE PPV. On the latest episode of Raw, Mysterio battled in the main event against Bobby Lashley. Despite giving it all, the Master of 619 failed to overcome the All Mighty One. Moments after his loss, Adam Pearce announced that Mysterio has been removed from the team.

Austin Theory ran in and attacked Dominik Mysterio. As a result of which, Adam Pearce immediately added him to the Team Raw. With the addition of Theory, the Men’s Team Raw now consists of:

In addition to new members being added to the teams, new matches were also added to the WWE Survivor Series 2021 card. The current card includes:

5 current superstars who can bring the fight to Brock Lesnar 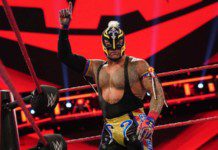