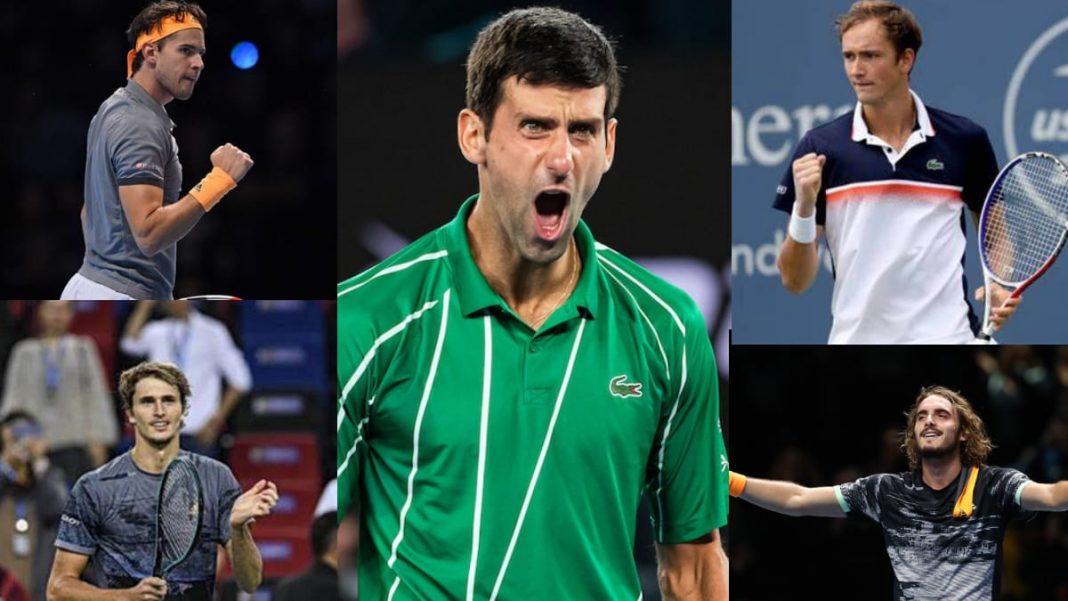 Novak Djokovic has won the first two grand slams in 2021. He outplayed King of clay at French Open 2021 and Daniil Medvedev at Australian Open 2021. In 2021 he can create history and become 2nd person after Rod Laver to win the golden slam. Nadal and Federer’s record against Djokovic isn’t good in the past few years, so now it’s up to next-gen stars to stop him.

These new generation’s quartets including, Dominic Thiem, Stefanos Tsitsipas, Alexander Zverev, and Daniil Medvedev, who has defeated the World No.1, 5 times since 2019. Having said that, all these 4 players are at least 7 years or beyond, younger than Djokovic. It obviously states that they might have more or equal power, stamina, and aggression than World No.1.

Astonishingly there is a surprising fact about Novak Djokovic going against Roger Federer and Rafael Nadal. Since 2014 to date, Djokovic has faced the Swiss Maestro 6 times in the Grand Slams. Which includes thrice in the Wimbledon, twice in the Australian Open, and once in the US Open.

Much to everybody’s surprise the current World No.1 has a 6-0 record over Roger Federer. Talking about Rafael Nadal, he has not won against Djokovic, since in 2013 US Open’s victory. Since 2011, Djokovic and Nadal have squared off in the finals of a Grand Slam, 5 times, out of which Djokovic leads 4-1.

There is no doubt about the impact Federer and Nadal have had on the sport and it could be said rightly that no player in any era has been able to dominate them. But just statically speaking, Djokovic outruns them when it comes to competition in a Grand Slam.

Now talking about the new generation quartet which includes, Dominic Thiem, Stefanos Tsitsipas, Alexander Zverev and Daniil Medvedev. They have not met Djokovic a lot in the Grand Slam in these recent years. But mentioning, ATP tournaments which also have great pride, especially for the younger players, they have been able to defeat the latter. Sometimes even in significant fashion.

Thiem is currently ranked World No. 3 and is behind Djokovic by more than 3,000 points. Austria born has faced the Serb 6 times since 2017 and has overcome the latter’s challenge 4 times.

Twice in the French Open and the same amount of times in the ATP Tournaments. Thiem is known for his ability to change the pace of the game in no time and more often than not, this tactic of his has worked against Djokovic.

Since the beginning of 2019, Medvedev and Djokovic haven’t clashed off in a major Grand Slam but have faced each other in ATP Tournaments. 2019 was the career best year for the World No. 5, the French won 3 ATP Tournaments. Given that fact, he has defeated Djokovic 2 out of 3 times since last year. One of those victories came in the Cincinnati Open in USA itself.

The Greek player has played the Serbian, World No.1, 4 times since 2019 and has not been able to assert his authority like his other companions. Having just won once in those match ups, the considering point would be when Tsitsipas defeated Djokovic after losing the 1st set in Shanghai. Tsitsipas was formidable in that match, having racketed 31 aces.

The 23-year-old German player has squared off against Djokovic 4 times in the ATP Tournaments and has emerged victories 2 times. Having said that, whenever Zverev won against the World No.1, he doesn’t seem to show any respect to the latter, as he won in straight sets each time. Even the 2019 French Open, in which the pair played in, Zverev took the 1st set handsomely. But seemed to lose his rhythm after that.

The Tennis fanatics all over the world would be glued to their screens to see action unravel on the court. Having said all that all speculations would be put to rest when at the end of 2021. But it is evident that Novak Djokovic has no problem facing Federer or Nadal at the grand slam. It’s the Nextgen players who can pose a threat to him.

Tennis at Tokyo Olympics 2020: Pablo Carreno Busta vs Daniil Medvedev LIVE stream: When, Where, and How to Watch