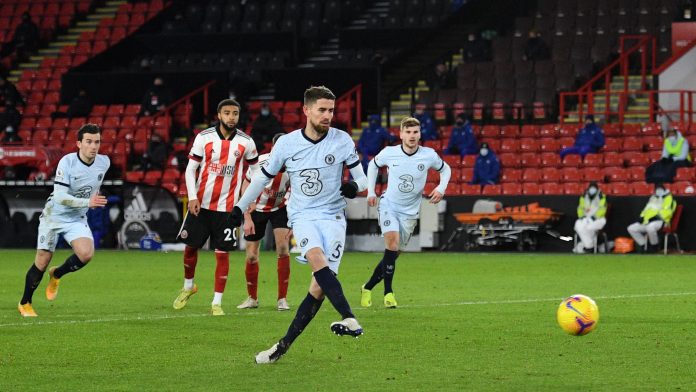 Chelsea went on to defeat Sheffield United by 2 goals to one in the Premier League on Sunday night. The London giant’s have registered their third win under Tuchel in just four games.

Mason Mount opened the scoring for the blues and then Italian international Jorginho stepped up to take the penalty which was the winner for Chelsea.

Thomas Tuchel fielded a different side to the one that defeated Tottenham Hotspur with Andreas Christensen replacing the injured Thiago Silva. Callum Hudson Odoi lost his spot as Olivier Giroud returned to the side with Timo Werner being given another opportunity. Mason Mount retained his spot and a welcome opportunity was given to Ben Chilwell.

Timo Werner did extremely well for the first goal as his run was picked out by Ben Chilwell on the left flank and the German squared it up for Mason Mount. Mount fired a scorching shot with his weaker foot past Aaron Ramsdale to give Chelsea the lead.

A moment of horror at the start of the second half for Antonio Rudiger who gifted Sheffield United the equaliser. A miscommunication with Goalkeeper Eduoard Mendy and he just passed the ball into the back of his own net.

However Sheffield United’s joy was short lived as Timo Werner capitalised on a loose ball at the back and earned them a penalty. Once again it was Jorginho who took the penalty. 2 out of 2 for Jorginho and Chelsea’s lead was restored.

You arrive in Sheffield in February and it’s waiting for you,’ he said of the tricky conditions posed by the environment and our hosts.

‘It feels like a cup game when you arrive against a team full of energy and courage. Against a very direct and physical team, you have to accept that not all moments in the game are easy and we accepted that, which was good.

‘We had some difficult moments to overcome, we were lucky with the penalty not to be 1-0 down, but in general it was a deserved win and I’m happy for that because from here we can build confidence.’