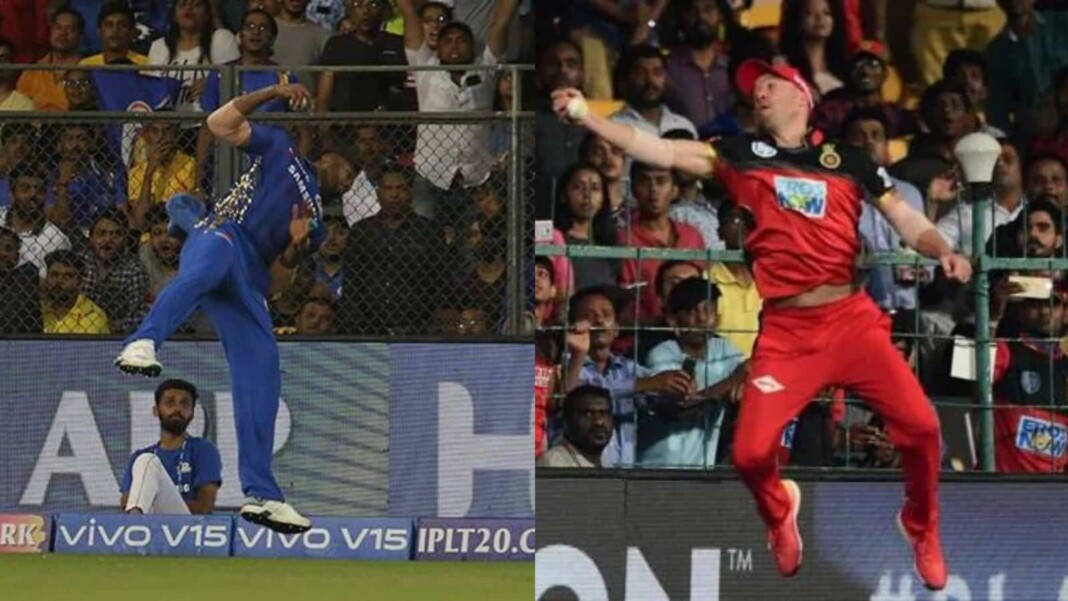 Since its inception in 2008, the Indian Premier League (IPL) serves cricket fans with utmost entertainment. Fans become witnesses to top-notch performances from the players in all three facets of the game. Needless to say that the Indian league also sets high standards of fielding.

Over the years, there have been many instances when the players have grabbed all the headlines by their sensations fielding skills. In this article, let’s take a look at the 5 best catches in the history of the T20 league.

Kolkata Knight Riders were up against Royal Challengers Bangalore in an IPL 2014 league match. The game went down the wire as RCB needed just six runs from the last three balls with AB de Villiers in the middle. The former South Africa skipper decided to finish off the game with a maximum and thus he hit the ball towards the cow corner boundary. The ball was all set to cross the boundary line but Chris Lynn took a stunning catch in the air to send the RCB batter back to the pavilion. The game ended with Knight Riders winning by two runs.

There is a reason why AB de Villiers is called the Superman in the gentlemen’s game. While playing against Sunrisers Hyderbad, AB took the greatest catch of his entire cricket career to dismiss Alex Hales. The Australian batter smashed the ball towards the mid-wicket boundary and was hoping for a maximum. However, De Villiers who was standing on the edge of the boundary, jumped in the air to collect the ball.

David Hussey also has a sensational catch to his name in IPL. While playing for Delhi against Kolkata Knight Riders in 20120, David took a catch while being airborne to dismiss Paul Collingwood. However, in an attempt to take the catch with both hands, Hussey was thrown out of the boundary rope. This is when the fielder used his brain as he threw the ball inside the fence and quickly jumped in the ground to successfully complete the catch.

The next person to make it to this elite list has to be New Zealand’s, Trent Boult. It was during a match between RCB and DD (now Delhi Capitals) in 2018 that Boult stole all the thunder with his extraordinary fielding performance. Virat Kohli flicked the ball by Harshal Patel to the mid-wicket boundary for a massive hit. Boult perfectly judged the ball and managed to catch it with his left hand. Though the momentum carried the Kiwi star towards the boundary, he didn’t lose his balance and managed to save himself from touching the fence.

The finest catch of Kieron Pollard’s IPL career came in 2019 when he managed to dismiss Chennai Super Kings’ swashbuckling batter, Suresh Raina. The Super Kings batter was aiming for a boundary from the deep point. However, Kieron Pollard acted as a roadblock as despite standing inside the field, the all-rounder lifted himself up in the air to take a stunning one-hand catch.