The nail-biting match between Sydney Sixers and Brisbane Heat in the home team’s favour on the last ball at the Sydney Cricket Ground, Sydney. Speedster Sean Abbott emerged as the one-man army in front of the Jimmy Pierson-led side with his top-notch contribution in all three departments of the game.

During the first innings of the match, Abbott also claimed a terrific one-handed catch to complete the wicket of Chris Lynn. The incident took place during the fourth over when fast bowler Ben Dwarshuis bowled a good length delivery and the right-hander came down the track to hammer the ball through the offside.

However, the ball went towards Abbott, who leapt to his right at the cover and took a sensational catch to send back the explosive Aussie batter. The official Twitter handle of the KFC Big Bash League also could not resist hailing the 29-year-old’s ‘unbelievable catch’.

Sean Abbott with one of the best you’ll see #BBL11,” the tweet with a clipping of the catch read.

Earlier, the Brisbane-based franchise opted to bat first after winning the toss on Wednesday. However, their decision didn’t turn out to go in their favour as they bundled out for a mere score of 105 runs without playing out their full quota of 20 overs.

Abbott emerged as the pick of the bowlers for Sixers with his outstanding spell of 4/31 in four overs. Adding to this Dwarshuis and Kerr also added two wickets each against their name.

On the other hand, Sydney’s batters couldn’t begin from where their bowlers left as they kept losing wickets at a regular interval. However, Abbott once again came to their rescue with his unbeaten knock of 37 runs as Henriques and Co clinched the nail-biting game by two wickets. 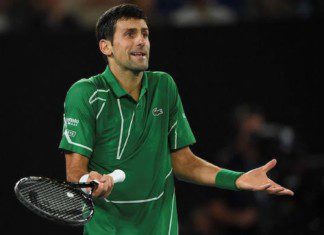