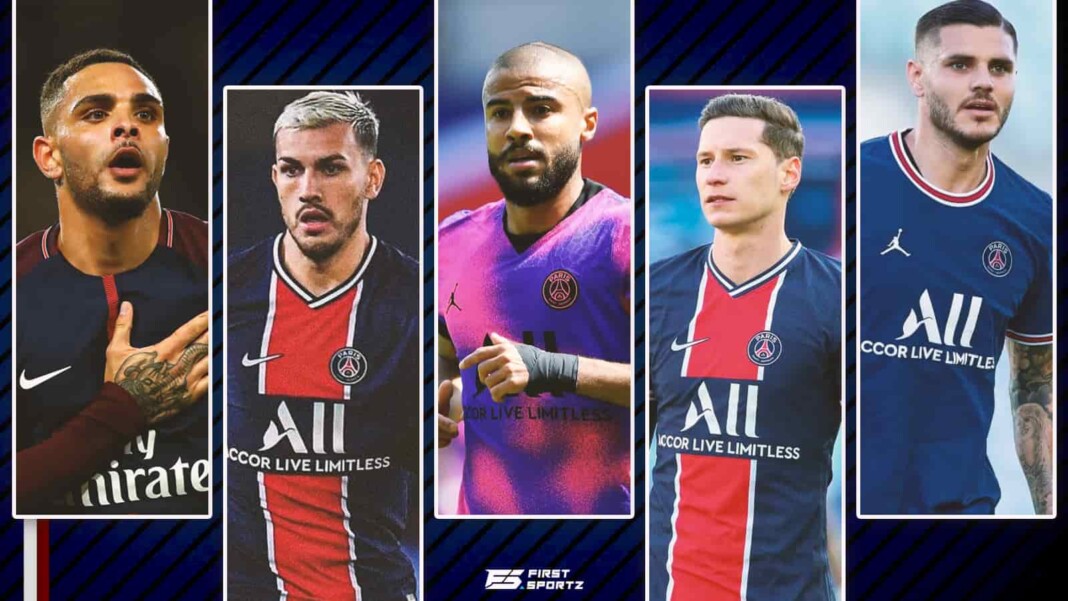 The Ligue 1 side PSG after signing some great and big names in the squad in the Summer Transfer Window have been performing really well and aims to do much better in near future. Although the new signings have been quite beneficiary technically for the team but financially it has induced some pressure in the wage bills.

The signing of Lionel Messi, Gianluigi Donnaruma, Georgino Wijnaldum, Sergio Ramos, Achraf Hakimi and Nuno Mendez have increased the annual wage bill of the club by a lot. The board will be looking to sell some of their players in the January window to get their financial statement in a better condition.

The players who might make a move from PSG in January are:

Layvin Kurzawa, the 29 year old French left back signed with Paris Saint Germain in the year 2015 from Monaco. The defender was a major part of the French team for the past six years but his recent injuries have made him a sitting asset for the club.

With young stars like Nuno Mendez, Teddy Alloh along side Juan Bernat, Kurzawa does not look likely to get any more chance in the starting XI. The Frenchmen recently extended his contract with PSG in 2020 for four year but now with several better options in the left back position PSG will definitely look likely to find a suitable offer for the Frenchmen to release him in the January window.

Leandro Paredes joined Paris Saint Germain in 2019 from Zenit as he began to start games for the French club in the defensive midfield position. With the new signing of Georgino Wijnaldum along side Hererra, Gueye, Danilo Pereira, Veratti and many others PSG will definitely look likely to sell Paredes in the January Transfer Window.

Paredes has recently been struggling with some injuries but the 28 year old Midfielder still looks strong to sign with some major European club. According to reports Olympique Lyonnais was interested to sign him in summer which might end up being a possibility in the January window.

Rafinha was signed by Paris when his technical gameplay impressed the PSG boards. He was signed last year by PSG but the Brazilian seem to have hardly made much appearances, firstly due to injuries and secondly due to wider range of availablity of players who have provided much better results.

PSG might get Rafinha off of their plate in the January window as Pochettino does not seem to have had any use for the midfielder. Being at the age of 28 years, Rafinha could display some useful and impactful football for some club rather than spending his prime era on the Paris bench.

The German international Julian Draxler proved himself to be one of the most important and best players in the midfield for PSG. He was signed PSG in 2016 from VfL Wolfsburg after witnessing his exceptional quality of gameplay and his intelligence to distribute the ball.

Although in the recent years Draxler has not been able to be of much help and his performance seems to have taken fall. With much more wider and better options in the midfield currently, Pochettino will be looking to him on the transfer list for the January in order to inject some funds into the PSG finance.

Mauro Icardi, the Argentinian striker has proved himself to be worthy of the PSG shirts as he presented himself in vital moments when the club needed him and came in with the clinical strikes. With the signing of Lionel Messi, Mauro Icardi was dropped to the bench and is subbed in occasionally.

According to rumour which recently arose, Mauro Icardi was involved in the talks of a swap deal between Sergio Aguero from FC Barcelona, although this looks to be just an rumour. PSG will be looking to get Icardi off of their cards in this January window and will be looking to sign some young legs up in the forward line.

Also Read: Ligue 1: Marseille vs PSG Player Ratings as 10-men Paris come out with a goalless draw from the Le Classique