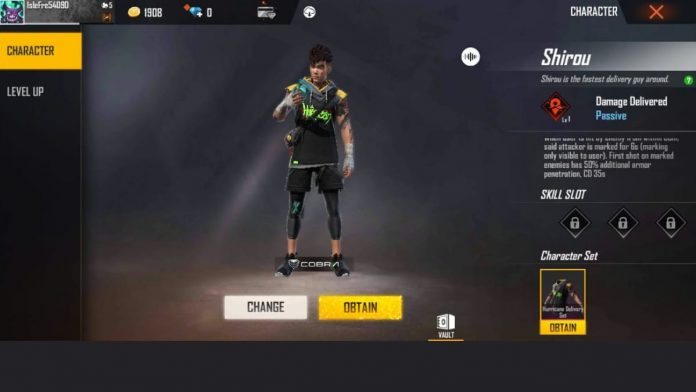 Free Fire is one of the most popular titles in the battle royale mobile community. Moreover it has garnered a massive player base throughout the world. Likewise one of the latest characters to be included in the game was Shirou. In this article we take a look at Free Fire Shirou and an in-depth look at his abilities.

The game has several unique features that makes it different from other BR games. One of these is the inclusion of characters with unique personalities and abilities Every character in Free Fire, except Primis and Nulla, has a unique ability. Moreover these abilities can change the flow of battle if used properly.

Related: Trick to get DJ Alok and Free Fire Diamonds for Free for February 2021

His in-game description states him to be the fastest delivery guy around.

His in-game ability is called Damage Delivered. Likewise this ability has a very strong effect.

At the initial level the opponent who hits the player with 80m is marked for 6 seconds. However this mark is only visible to the player. Likewise the first shot that is fired on the marked target will have 50% additional armor penetration. This ability has a cooldown of 35 seconds.

However his ability significantly powers up when maxed out at level 6.

Likewise the enemy who hits the player is marked for 6 seconds within 80m. However the first shot on the enemy has an additional 100% armor penetration. This now has a cooldown of 20 seconds.

Likewise the Level up can be done with Character Level Up cards.

Tips to play the character

Shirou is a counter character due to his ability. His ability only becomes useful once hit by an opponent. Therefore players need to get hit once to get the armor penetration damage.

Players are advised to communicate with squad members effectively. This is because the marked target is only available to the player. Likewise players can either communicate through in game voice-chat or through texts.

Good character combinations for Shirou are: