American gymnast Gabby Douglas stopped training back in 2016 after two successful stints at the Summer Olympic Games. However, she has not officially announced her retirement yet but did not take part in the US Olympic team trials for Tokyo 2020.

Gabby’s breakthrough career moment came at the 2011 Tokyo World Championships where she won the gold medal in the team event. Following this, she won two gold medals at the 2012 London Games, in the team and all-around, but failed to medal in an individual event. Moreover, she bagged yet another gold at the Rio Games in 2016. With all these achievements, she became the first African American to become the Olympic individual all-around champion.

Why did Gabby Douglas quit gymnastics and where is she now?

Back in 2017, the 26-year-old apologized for a tweet she posted that caused a public rift between members of the Final Five. For those who don’t know, apart from her, Simone Biles, Laurie Hernandez, Madison Kocian, and Aly Raisman, were the other members of Final Five with MyKayla Skinner, Ragan Smith, and Ashton Locklear serving as the three alternates.

Douglas had felt apologetic and said she was “deeply sorry” for saying that women should “dress modestly and be classy” to avoid enticing the “wrong crowd”.

The tweet was in response to her 2016 teammate Raisman who had earlier confirmed that she was sexually abused by the USA Gymnastics doctor Lawrence G Nassar.

“Honestly seeing this brings me to tears bc as your teammate I expected more from you & to support her.

“I support you Aly & all the other women out there! STAY STRONG,” she had tweeted.

After parting ways from gymnastics, the California native Douglas became a media fixture starring in Kickin It and Undercover Boss. She was even crowned as the winner in The Masked Dancer in February last year. 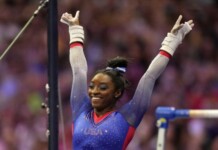 Anish Arora - May 16, 2022
The fifth round of the Formula 1 2022 season was hosted in the United States. The inaugural Miami Grand Prix was hosted and was...