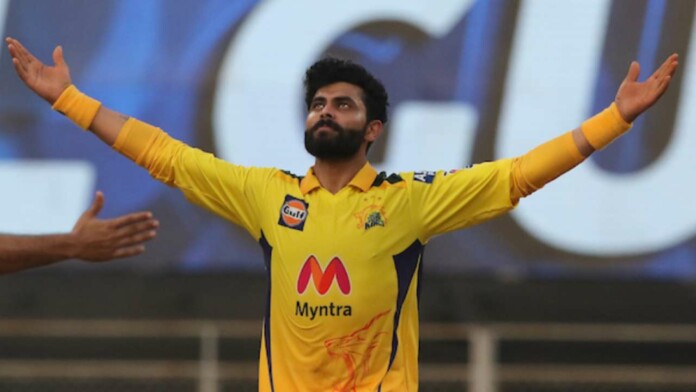 After the 19th match of the IPL 2021 between Chennai Super Kings vs Royal Challengers Bangalore at the Wankhede Stadium, Mumbai, Sanjay Bangar, batting consultant of RCB reflected on Ravindra Jadeja‘s growth.

Bangar, who was the batting coach of the Indian cricket team until 2019, thought Ravindra Jadeja had made significant progress as a batsman. He went on to say that the team’s management had always believed Jadeja could make it big with the bat and that he was pleased to see him succeed.

“He’s gained a lot of confidence. Right from 2016, he started playing regularly in Test format and then he kept on making contributions to the team’s cause, even overseas. I think he has grown as a batsman,” said Sanjay Bangar at a post-match conference.

Chennai Super Kings posted 191/4 on the board against RCB thanks to Jadeja’s sizzling 62, and then contained the opposition to 122/9, with Jadeja (3/13) and Imran Tahir (2/16) doing the majority of the harm.

Jadeja stunned everyone by guiding CSK from 117/3 in 15 overs to 191/4 in 20 overs. In the final over of the innings, Jadeja shattered 37 runs against the Purple Cap holder Harshal Patel which is the joint highest runs scored in a single over in the history of IPL.

Sanjay Bangar also addressed Ravindra Jadeja’s domestic achievements as well as his potential. Bangar was pleased to see Jadeja contribute and labelled him as the game-changer of the match.

“And we all knew that he had fantastic potential because he is somebody who has already scored three triple hundreds in domestic cricket. So, it is good to see that he is contributing to the Indian team’s cause and for CSK as well. Because he was the game-changer today and all credit to CSK for having outplayed us tonight,” added Bangar

The Skipper of the Indian team and RCB, Virat Kohli too was in awe after Ravindra Jadeja’s mindblowing performance and also described how Jadeja took away the momentum from RCB in the last over.

“One guy completely beat us. Today his skill was there for everyone to see. Harshal Patel bowled well and we will continue to back him. His two wickets of the set batters took the momentum away from CSK before Jaddu took it away in the final over,” said Kohli.

Kohli also stated that he is excited to share the dressing room with Ravindra Jadeja when the two reunite to play for India in about two months.

“Jadeja’s ability has been there for everyone to see. I am very happy to see him perform with the bat, ball, and on the field. After two months, he will be back playing for India and it is always a pleasure to see your premier all-rounder do well with the bat. When he plays well and is confident, it lets out many opportunities,” added Kohli.

Royal Challengers Bangalore and Chennai Super Kings will meet each other once again in the reverse fixture on 23rd May at the Eden Gardens Stadium, Kolkata.

Sadok Limma - June 16, 2021
Arsenal will seek to improve on one of its most dismal seasons in recent years as they are set for their 2021/22 Premier League...