Did Buddy Hield score the fastest bucket in NBA History? Know who holds the record 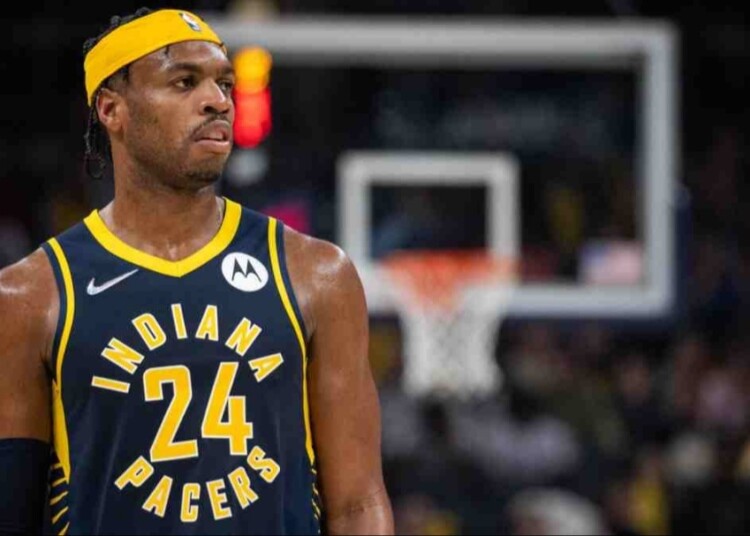 Due to what could possibly be the fastest basket in NBA history, Buddy Hield is all over the internet. The Indiana Pacers guard wasted no time in getting things going in a game against the Cleveland Cavaliers.

Hield grabbed a game-opening jump ball out of that Cleveland Cavaliers center Jarrett Allen tipped his way, pivoted at the top of the key and instantly connected on a 3-pointer to give Indiana a 3-0 lead only three seconds into the game.

Fans are now debating whether the basket set a new NBA record on social media. One person wrote, “Buddy Hield drops a 3 right off the opening tip. Got to be the fastest 3 in NBA history.” Another said, “Tip, catch, turn, and shoot. Buddy Hield with the quickest basket in NBA history?”

The three-pointer was the fastest since play-by-play statistics (from 1996 to 1997) have been kept, according to ESPN Stats & Info. The previous record holder was Indiana icon Reggie Miller, who fired a fast shot back in March 2000. It’s interesting that Hield edged out another Pacer for the top mark.

But who holds the record for the fastest basket scored ever? The fastest baskets in recent memory were two made at 11:57 early in the 2015–16 season by Roberson and Batum, tied with Buddy Heids’ three-pointer against the Cavaliers.

However, there are a few speedier ones listed. Josh Smith lists one from 2007 at this location at 11:58. That’s not the fastest one in the database, either! In 2001, Derek Anderson has an 18-foot jumper credited at 12:00 on the clock after a jump ball violation.

However, because they were recorded before YouTube existed and there is no online proof of them. It’s reasonable to state that Buddy hield’s three seconds three-pointer is the NBA’s quickest basket.

Also Read: Which player holds the record for Most Blocks in a single NBA game?

Cleveland Cavaliers were upset by the Indiana Pacers, despite Cavs’ 4-point halftime lead. In a key game, the Pacers had 4 players score more than 20 points and 5 players score in double figures. Tyrese Haliburton, who has the most assists in the NBA this year, is the Pacers’ offensive coordinator. For the Pacers, Haliburton had a game-high 29 points and nine assists.

In just 33 minutes of play, Hield scored 25 points and connected on 5 of 6 three-point attempts. In a 135-126 victory over Cleveland, the Pacers’ rookie Bennedict Mathurin scored 23 points and Aaron Nesmith added 22. Despite having 7 players score in double figures, the Cavaliers lost the game. Only Donovan Mitchell, though, finished with more than 20 points in the contest. Caris LeVert and Jerrett Allen both scored 19 points, while Mitchell led the squad with a team-high 28 points.

The Cavaliers have now lost quite a few games this year, but they still have a very impressive record in the competitive Eastern Conference. The Cavaliers are fourth in the Eastern Conference with 24 victories so far this season, just behind some of the better teams in the league. Behind Haliburton and Hield, Indiana sits sixth in the same conference and has had a fantastic season.

Also Read: After spending 6-seasons with the Kings, Buddy Hield only tells Sacramento to ‘S*ck his D**k’ on Live TV