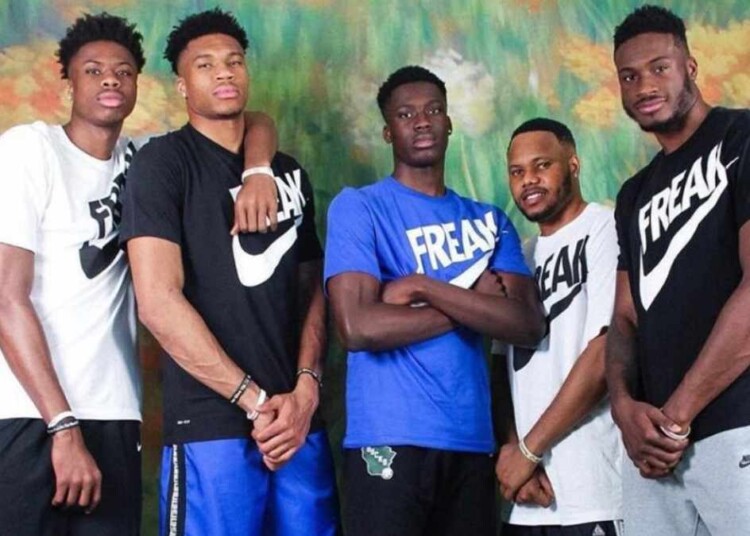 Giannis Antetokounmpo is one of the greatest basketball players to ever play the game. A 2x MVP, Finals MVP, DPOY, and an NBA Champion, Giannis has accomplished almost everything there is to accomplish in the NBA in merely a decade. The Greek Freak’s biggest achievement though might be the fact that he gets to share every moment of greatness with his family.

At this point, all NBA fans are aware of Giannis’ humble roots in the streets of Sepolia, a neighborhood in Greece’s capital city of Athens. Being a family of undocumented immigrants, the Antetokounmpos could trust very few people but themselves. This built up a special bond between the 4 brothers who grew up in Greece. Giannis is the middle child of 5. He has two older brothers, Francis and Thanasis. Disney made a whole movie about it which all NBA fans should go and watch to know more about the tough situation that the family had to overcome.

The oldest brother Francis is the only one of the brothers who was born in Nigeria. When Giannis’ parents emigrated from Nigeria to Europe in search of a better life, they had to leave Francis behind with his grandparents as he was too young for the journey. As such, he had a different upbringing from his younger brothers growing up in Nigeria.

Francis is the only one of the brothers that did not pursue a career in basketball. Instead, he chose a path in music. Francis Antetokounmpo today officially goes by his stage name ‘Ofili’

Whenever Giannis dunks or makes a big play, there is one other thing that fans are sure to notice. It’s a figure on the Bucks’ bench jumping up and down and showing the most emotion out of everyone in the arena. That person is Thanasis Antetokounmpo, the 2nd eldest brother. Giannis and Thanasis share a special bond with each other. Giannis has rarely ever been without Thanasis. He is the only member of the Antetokounmpo family that was able to secure a visa to travel with Giannis to the NBA draft and Giannis clearly values his advice and motivation a lot.

Thanasis himself got drafted by the New York Knicks in 2016, but he had to go back to Europe after getting cut from the roster. The Milwaukee Bucks reunited Giannis and Thanasis in 2019 by signing the latter. He has been with the Bucks ever since and was part of the title-winning team in 2021.

The tallest of the Antetokounmpo brothers, Kostas has some bragging rights over them. Selected with the last pick of the 2018 draft by the Philadelphia 76ers, Philly traded his draft rights to the Dallas Mavericks.

Kostas actually beat his brothers Thanasis and Giannis and was the first one in the family to win an NBA championship, being part of the Los Angeles Lakers team that won in the bubble. Thanasis signed a two-way contract in October of 2022 but was waived a month later and currently plays for Fenerbache in the Turkish Super League.

The youngest of the 5 brothers is Alex. He completed his high-school years in Milwaukee living with Giannis before going on to play overseas. Giannis once famously proclaimed that Alex is the best out of all the brothers, even better than himself. “I definitely think Alex can be better than me,” Giannis told Mirin Fader in 2019. “He stays motivated. He wants this. That’s what makes him special. He’s not satisfied.”

Alex entered the NBA draft in 2021, however, he went undrafted. Later in the season he got an exhibit 10 contract from the Toronto Raptors and spent the season with their G-League affiliate Raptors 905. In 2022, Alex Antetokounmpo joined and was named on the opening night roster by the Wisconsin Herd, the G-League affiliate of the Milwaukee Bucks, reuniting him in a way with Giannis and Thanasis. The Antetokounmpos’ journey is truly a great story about overcoming impossible odds and serves as an inspiration to many.

“I lose a few games. Only the real ones are here,” Giannis Antetokounmpo HILARIOUSLY calls out the reduced media attention as Milwaukee Bucks struggle