“Bro must have a problem with all of the 2022 lottery picks” Fans react to Dejounte Murray and Trae Young getting into a BRAWL with Jabari Smith, Rockets 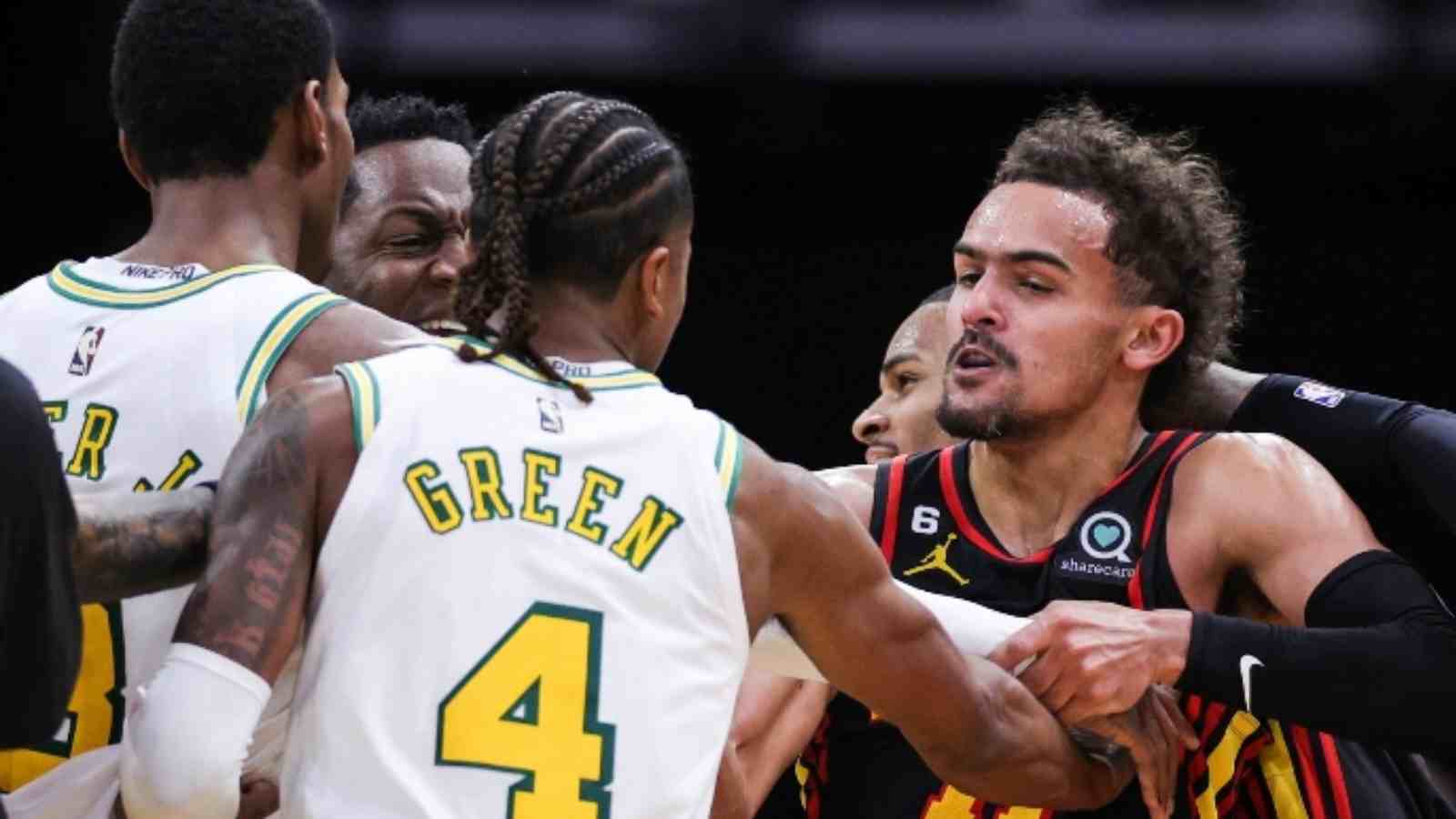 Dejounte Murray is all over the NBA headlines and the reason is again him beefing with a rook from the 2022 class. This time on the receiving end was Houston Rockets’ Jabari Smith Jr. Dejounte Murray disrespected the rookie unnecessarily and soon got clapped back by falling on the unfortunate losing end against the Houston Rockets at 128-122 in Toyota Center.

The final result of the game is very unexpected as the Hawks had an easy road to win it all. But thanks to Dejounte Murray, as he fueled up his rivals and unintentionally but successfully sold the game away. He disrespected the Rockets’ rookie, Jabari Smith Jr. by giving him a head tap and that just didn’t age well with the Rockets who then got the job done while revenging on Murray.

In the third quarter, with seven minutes and twelve seconds remaining, Dejounte Murray drilled a three pointer while being guarded by Jabari Smith JR. And, as the shot went in and everyone’s head was turned towards the rim, including Jabari Smith’s. Dejounte Murray disrespected him by giving him a head tap as he wasn’t able to guard him. After this play, it was a changed game and the Rockets were hungry and out for revenge.

Dejounte Murray disrespecting Jabari Smith Jr. was taken personally by the Rockets so they checked on the Hawks. After that disrespect, there were various moments the players exchanged. But with six minutes and thirty-five seconds remaining for the third quarter to end the game was stopped.

As Dejounte Murray and Jabari Smith Jr. got into a brawl and the officials and the security had to jump in to separate them before things turn dirty. The energy was soon transferred to Jalen Green and Trae Young too, as being good teammates even they jumped in to back their guys up.

The security though separated everyone and once things were down and calm everyone was back and hooping. But after that brawl, the Rockets just balled out and handed a BIG L to the Hawks. The disrespect was even addressed by Jabari as he said: “It was some disrespect that needed some straightening.”

The clip of Dejounte Murray and Trae Young getting into a brawl with the Houston Rockets is viral all over the internet. As fans are clowning the Hawks’ new superstar guard for disrespecting the rivals and then ending up on the losing end. You can find some of the many reactions and trolls posted by fans on social media platforms here below:

In the game, Trae Young (44 points) and Dejounte Murray (39) combined for 83 points and sent out the best possible efforts they can. But those weren’t enough to win it all. As Jabari Smith Jr., and Kenyon Martin Jr. Both dropped 21 points each while backing up Jalen Green who contributed with 30 points and led the team to secure a dub and advance to 4-11. While shutting down Murray and humbling everyone relating to the Hawks in the arena.