WATCH: “Not another Hamlin-like accident please”- NFL Twitter sends in prayers as Bucs WR Russell Gage was carted off the field after a horrific neck injury

NFL world in shock once again as Tampa Bay receiver Russell Gage was carted off the field during the final quarter of the wild card game against the Cowboys. 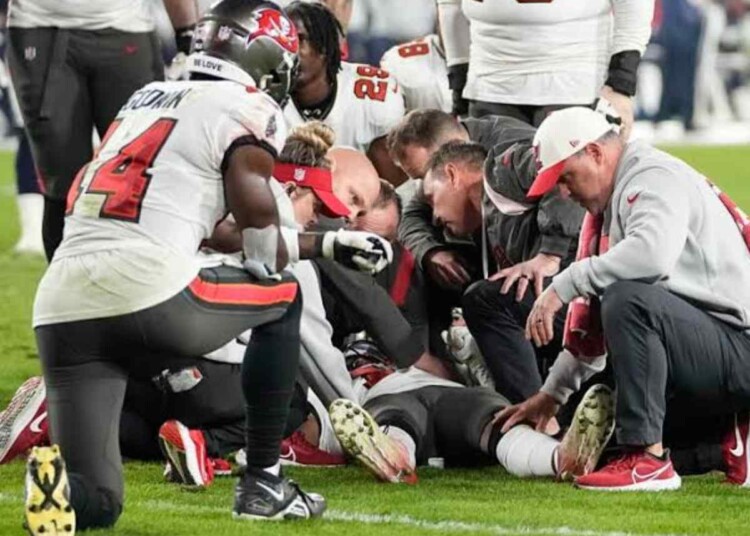 The streak is finally broken! The Dallas Cowboys have broken Tom Brady’s 7-0 record against them and emerged victorious against the 7x Super Bowl Champion and his Buccaneers. The entire Cowboys team coalesced as one and played just exceptional football on the field.

The Cowboys defeated the Buccaneers 31-14 in what can be described as an epic blowout on Tampa Bay who just couldn’t get their offense going and convert on third downs. Tom Brady didn’t have time in the pocket courtesy of Micah Parsons and co. and couldn’t find any receivers open down the field. It seemed liked the Cowboys defense had a personal vendetta against the 45-year-old quarterback as they kept on pressuring him and managed to sack him in the second half of the game.

The highlight of the game wasn’t the four touchdowns thrown by Dak Prescott, it was the unfortunate injury of Bucs wide receiver Russell Gage who had to be carted off the field. This visual sent a chill down everybody’s spine as they were thrown back two weeks as the whole world watched Buffalo Bills safety Damar Hamlin suffering from a cardiac arrest right in the middle of the game.

Related: WATCH: “He is drunk as Hell” – Cowboys kicker Brett Maher gets brutally CLOWNED on social media after missing 4 extra points in all-important playoff game against the Buccaneers

This incident occurred in the fourth quarter of the game with 2:55 left on the play clock. Tom Brady threw an incomplete pass to Russell Gage on second and 10 during which Cowboys safety Donovan Wilson’s helmet hit the back of Gage’s head. After taking the hit, the 26-year-old receiver out of LSU was on the field for a long time, unable to get up. Tampa Bay’s athletic trainer ran onto the field and stabilized the young wideout on a backboard before finally carting him off the field.

Players from both sides took a knee to show their support and prayed as they watched yet another one of their brothers being taken off the field due to a serious injury. Following this gesture, the game continued on with less than 3 minutes left in the game. Tom Brady and the Bucs tried their best to score but couldn’t come back from such a huge deficit.

Seeing Russell Gage Jr. go down, fans once again poured in their love, support, and prayers for the wideout all over the different social media platforms.

Bucs head coach Head Coach Todd Bowles has informed that Russell Gage has been taken to the hospital and is being checked for a concussion and a neck injury. Gage is said to have movements in his extremities. Let’s hope he is safe and recovers.

Related: Stephen A. Smith’s EPIC roast of the Cowboys goes viral ahead of playoff game against the Buccaneers

Related: What are the biggest comebacks in NFL playoff history?