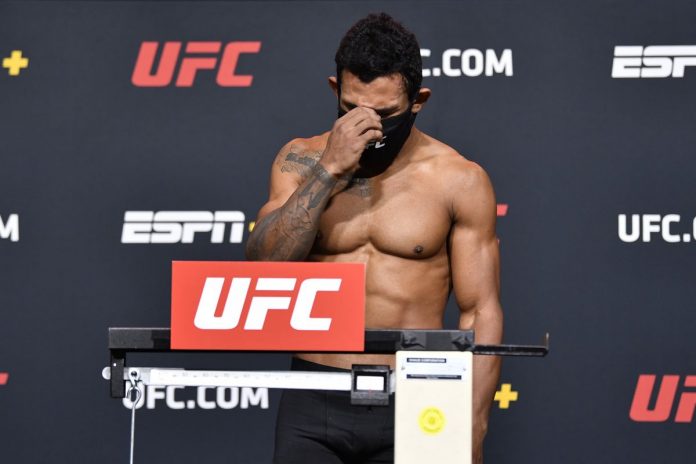 Can there be anyone more reckless than Rafael Alves, in the planet right now? The featherweight was supposed to make his UFC debut against Patrick Sabatini in the upcoming UFC Fight Night 185, and guess what – he blew it. The Brazilian came in at 157.5lbs – a whopping 11.5lbs heavier than the limit of 146lbs. This in turn lead to the bout being scrapped off from the card.

Had the UFC decided to go ahead with the bout, it would have officially been the biggest weight miss in the history of the UFC. The record for the biggest weight miss is held by Anthony ‘Rumble’ Johnson, who missed weight by 11lbs (pretty close to 11.5lbs), while taking on Vitor Belfort, in 2012. The bout went ahead as a catchweight bout, as ‘Rumble‘ lost the match via. submission in the very first round.

‘I’m sorry, but my health above everything’

Taking to Instagram, Alves issued an apology, saying, “Guys, I fell ill during my weight cut and my fight was cancelled. I’m sorry, but my health above everything.”

He further clarified it in a text message saying, “I ate salmon yesterday and fell ill, [had] vomit and diarrhea, so the doctor said I had to treat it with [drinking] water. I only had 2kg [4.4 pounds] left to cut, [but] when I drank water my weight went up and got stuck, so the doctor didn’t clear me to fight. But God owns everything and He knows what He does.” [via MMA Fighting]

Now, that’s not how you leave your mark, just before making your UFC debut. Another dumbfounding fact is that, Alves wouldn’t have made weight, even if it had been a lightweight bout. (he would have been 1.5lbs above the limit) What are you thoughts on this?

Also Read : ‘He should get back in the ring’ – Eddie Hearn has a piece of advice for the ‘out-of-sorts’ Deontay Wilder