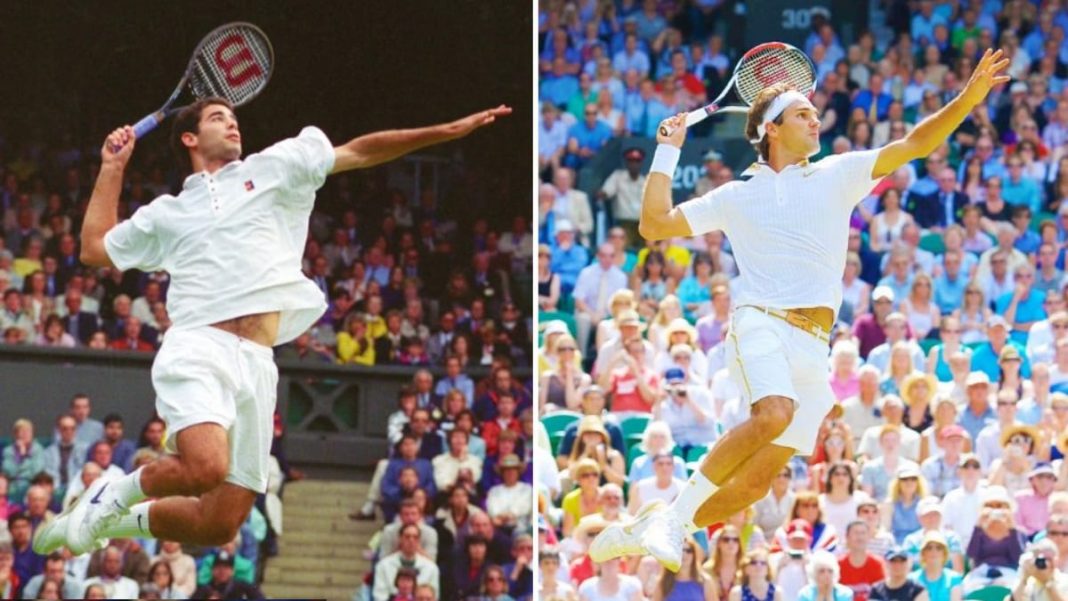 Swiss tennis great Roger Federer is without a doubt one of the greatest tennis players in history. His Grand Slam record, tournament titles, and most of all ‘the elegance’ with which he plays, supports the notion.

He is one of the players who have a wide range of playing styles in his arsenal and plays signature shots of other players with perfection, even in crunch situations.

Over the years he has entertained the crowd by doing exactly that. A video on YouTube contained a compilation of these amazing imitations of other players and their signature shots employed by the 20-time Grand Slammer.

Here, in this article we will mention some of the outrageous shots of other players played by Federer.

Anyone who has watched the American tennis legend, Pete Sampras, in play, would say that his signature shot used to be the Slam Dunk Smash.

Federer has made use of this shot many times and watching him play it brings back memories of the great Pete. It can be argued that Pete was a better Slam Dunker because of his explosiveness and more air time than Federer.

Jimmy Connors invented the famous “skyhook smash”. This is an overhead smash that uses an Eastern grip to hit the approaching ball more behind the body than a normal overhead smash.

It is not the easiest of shots to play and Federer showed his prowess. The Swiss playing the skyhook against Djokovic in an IPTL match sent the crowd and his team into raptures.

Andy Murray is a genius at playing the two-handed backhand with greater accuracy in smashes and lobs. The two handed backhand lob is the real killer for opponents as the Scot plays it with impressive precision.

Federer has included the shot to his arsenal with great success as he almost imitates Murray and gets out of a tight spot.

Rafael Nadal owns the signature Buggy Whip Forehand and the banana whip forehand. The Spaniard overpowers opponents with pace and spin on the ball. The banana whip is where Nadal strikes the ball around the opponent and sometimes even the net, with the ball still landing in the court.

Roger Federer has used his arch rival’s signature many a times and to make it more authentic he has used the grunts similar to Nadal for added entertainment.

Australian tennis legend Ken Rosewall was a master at backhand slice passing shots. The shot was employed as part of his playing style for control and to add a bit backspin and surprise opponents.

The Swiss maestro has deployed this shot often on returns, during rallies and while coming to the net, baiting opponents into match-altering errors.

Juan Martin Del Potro possesses an incredible forehand power resulting in a shot known as the ‘bullet forehand’. With a lethal combination of depth, pace and spin on the ball, he hits his signature stroke on the run, sending back a bullet of a response to his opponent when they least expect it.

Federer has one of the finest forehands in the game, but he did use the Del Potro forehand against Raonic at Wimbledon which did serve him well.

Vintage Andre Agassi’s play contained the deadly accurate overhead forehand shot with which he easily earned ripping winners. Federer, again being the versatile player he is has played this shot like a pro during Grand Slams and crucial games.