Kei Nishikori is set to be sidelined for six months, after the Japanese star announced that he will be undergoing a hip surgery to treat his injury niggles that have kept him from playing since October last year.

Nishikori posted on his official account, stating that he has explored other options, but after consulting his medical team he has decided to undergo arthroscopic hip surgery this week and said he is hoping to be back in six months.

“I will work as hard as I can and the goal is to be back in about 6 months. Thank you for all your support and look forward to seeing you on the tour again soon,” he posted.

His last match was in the second round of Indian Wells in October last year, where he lost to Dan Evans in three sets.

Since making his professional debut in tennis in 2007, Nishikori has been plagued with multiple injuries. He had to sit out of most of the 2009 season with an elbow injury. He also had to retire mid-match in his first Masters 1000 final at the Mutua Madrid Open with a back injury in 2014. He then had to skip the latter half of 2017 with a wrist injury, which saw him drop out of the top-20 rankings, for the first time since 2014. He then underwent elbow surgery at the end of 2019 and struggled with a shoulder injury in 2020 and competed in only four tournaments that year.

2021 was a much better season for Nishikori, he reached the fourth round at Roland Garros, before losing to Alexander Zverev and also recorded a victory against a top-10 player when he defeated Andrey Rublev in the first round of the Tokyo Olympics. But he had to bring his season to a pre-mature end due to a back injury.

The 2014 US Open runner-up, is yet to play a match in 2022, and will be hoping to not suffer any more setbacks in the recovery from his surgery and get his career back on track.

Also read: “I was pretty annoyed” Iga Swiatek wins a thrilling marathon match against Kaia Kanepi to advance into the semi-finals… 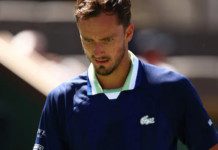 ‘I don’t play my best tennis on clay,’ Daniil Medvedev heartbroken yet positive after comeback loss in Geneva, eyes French Open next