WATCH: Stefanos Tsitsipas extends cheeky invitation to Margot Robbie to watch him at the 2023 Australian Open 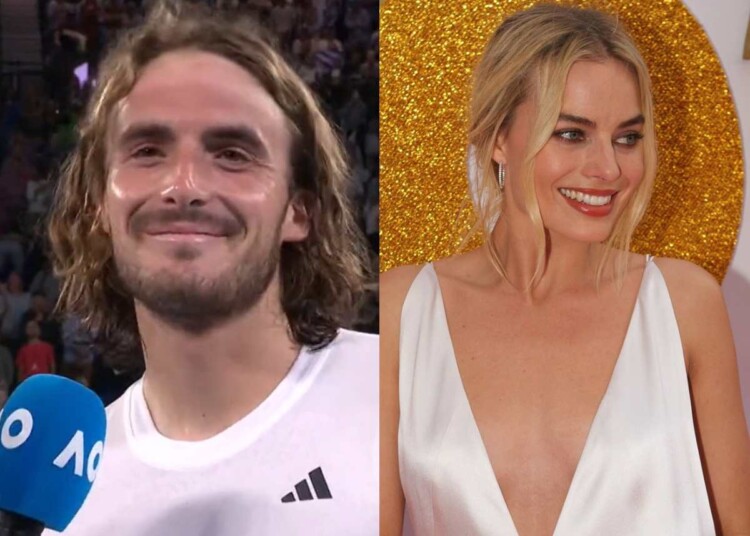 Stefanos Tsitsipas took full advantage of the courtside post-match press conference after his win against Jiri Lehecka to invite his favorite actress Margot Robbie to see him play at the 2023 Australian Open in Melbourne. The Greek star said that he liked Australia for the reception and that his favorite actor came from the country too.

This response bought great cheer from the crowd. But the question that was put to Tsitsipas was, “Is it Margot Robbie?” Flashing a broad smile on his face, Tsitsipas shook his head. When asked by the interviewer whether he was making a date proposal to her, Tsitsipas smirked and said, “It would be nice to see her there one day,” while pointing to the stands.

This generated laughter in the stands. The interviewer was dumbfounded by the turn a routine interview had taken. He regained his composure and asked the Greek player, “So you’re officially extending an invitation to Margot Robbie, I just want to be crystal clear here.” Tsitsipas took a dramatic pause before replying, “Absolutely.” The response led to loud cheering from the crowd.

No one could forgive Tsitsipas for taking the opportunity to invite the actress. The World No.4 had his head in the clouds after besting Jiri Lehecka to advance to the semifinals. The third seed made it look easy as he sent the Czech star packing in just over two hours. The straight-sets victory saw Tsitsipas play his style perfectly. He ended the match with nine aces to his name. He will now face Karen Khachanov in the semis.

Tsitsipas has had a brilliant start to the 2023 season. Coming into the year as World No 4, he has a great chance of ending January at the top of the ATP rankings.

Tsitsipas started the year at the United Cup. Representing Greece, Tsitsipas played both singles and doubles for them. His first game of the season was against Grigor Dimitrov, whom he beat in a comeback win. He then secured the doubles match with Maria Sakkari to win the tie against Bulgaria. They repeated the trick against Belgium and Croatia in the next two ties. Tsitsipas even won his tie against Italy, whom Greece lost to crash out of the Cup.

But he came to Melbourne unbeaten and confident. And it showed. Tsitsipas won his first three rounds without dropping a sweat. He had to work harder in the fourth round. But he came out a winner after a five-setter against Jannik Sinner. With this form, Tsitsipas might get his hands on the trophy at the Rod Laver Arena.