With this victory, he continues his bid for his 2nd French Open title after having won his first and only title at the Roland Garros in 2016, despite having reached the finals on 5 occasions. The French Open remains his only Grand Slam title that he hasn’t won multiple times and will be looking to change that fact this time around.

After his victory in the quarter-final, Djokovic was greeted by a group of Serbian fans who waited outside the stadium to congratulate the World No. 1 for his qualification to the semi-finals. Novak recorded the video and later posted it on his Twitter handle captioning it with Idemo, which translates to ‘Here we go’ and said “Thank you Serbians” in the video.

Djokovic was playing in the night session of the day at the Philippe-Chatrier and with curfew imposed in France after 11PM local time, fans were asked mid-match to leave when Djokovic was leading 2-1 going into the 4th set. This infuriated some fans which delayed the match, however seeing the fans waiting for him after the match, he celebrated with them quietly as seen in the video.

Novak Djokovic will face Rafael Nadal in the semi-final

This win sets up Novak Djokovic for a semi-final meeting with Rafael Nadal, in what will be their 4th semi-final meeting at the Roland Garros. In their 8 meetings so far at the French Open, Novak has won just once in their quarter-final clash at the 2015 French Open where he defeated the Spaniard in straight-sets.

This will be their 2nd meeting of the year having previously met in the finals of the 2021 Rome Masters where the Spaniard won in the decider set to clinch his 10th Rome Masters title. While Djokovic leads 29-28 in their 57 meetings so far, Nadal has a 19-7 record on Clay against the Serbian and 7-1 record in the French Open.

Novak was confident of his chances at winning ahead of his clash with Nadal calling the Spaniard his ‘biggest rival‘ after his quarter-final press-conference.

Novak Djokovic will be up against Rafael Nadal in the semi-final of the French Open 2021 with the match scheduled on 11th June, 2021. 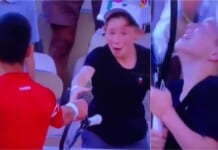