Novak Djokovic after receiving a medical exemption flew down to Melbourne. However, world No.1 was denied entry into Australia due to a visa mix-up.

Djokovic was being questioned about his medical exemption by the border police for nearly 2 hours. According to Novak Djokovic’s dad, Novak is being isolated in a room with two police officers.

As suggested by some of the experts the Novak Djokovic’s medical exemption might be tested by the border police at the Melbourne airport, and that is what happened.

However, Novak Djokovic was being questioned for nearly 2 hours by the Border Police. After which, Djokovic’s dad confirmed that Djokovic has been detained at the Melbourne Airport after being inquired about his medical exemption by the border police.

He has been isolated in a room with two police officers and is being denied to speak with anybody else. His mobile phone has also been taken from him, leaving him with no option to contact anyone. It seems that there were some major loopholes in Djokovic’s documents, which is why the Serb has been detained until the authorities come to a conclusion.

However, with the passage of time the chances of Djokovic participating in the Australian Open become lesser and lesser. He might be allowed to play or might be sent back home from the airport itself. Nevertheless, we hope that Djokovic’s misery comes to an end as soon as possible.

Also Read: Novak Djokovic might NOT BE ALLOWED TO ENTER into Australia according to the Border Laws 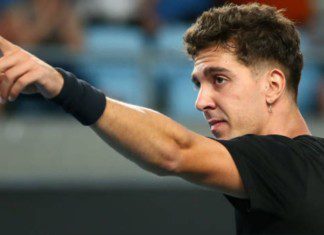 T Rushitha - January 27, 2022
Thanasi Kokkinakis is an Australian tennis player and has won one ATP title each in singles and doubles. His carrer-hingh ranking in singles is...