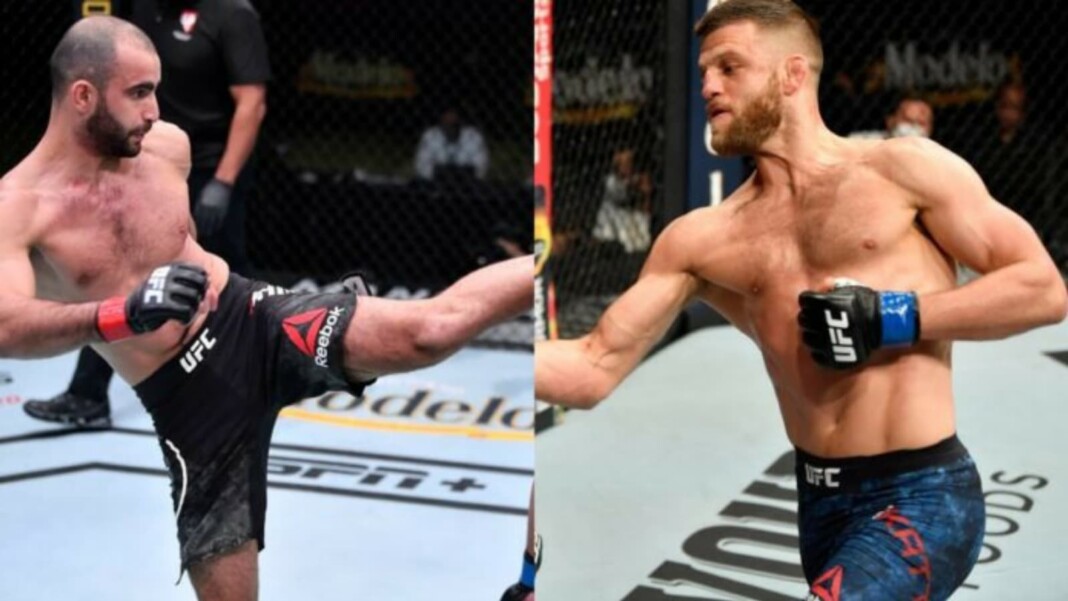 Looks like the UFC’s matchmaking skills these days are on fire as the company is looking to work out an exciting featherweight clash between vicious, expert strikers Giga Chikadze and Calvin Kattar. This fight is either going to put Chikadze on the map of title contention for sure or get Kattar back on the track of featherweights that are still hungry for the Featherweight championship.

The news was first reported by Brett Okamoto of ESPN-MMA after which ESPN tweeted the following with the caption: “UFC is working on booking a UFC Fight Night main event between Calvin Kattar and Giga Chikadze on Jan. 15, multiple sources told @bokamotoESPN. Contracts have not been signed.“

Later, Kattar’s manager, Tyson Chartier confirmed that a fight has been signed from their side for the main event in January, as told to My MMA News.

Chikadze, who initially came out of fighting for GLORY Kickboxing and then signed and fought for WSOF, Gladiator Challenge, and also Dana White’s Tuesday Night Contender Series before fighting for UFC in his debut of UFC Fight Night 160 in Copenhagen, Denmark, is on a vicious run of knockouts with his last two TKO finishes coming as the most notable victories of his career i.e. over Cub Swanson and Edson Barboza. Chikadze has this signature strike that involves a kick to the liver, so vicious that has been respected by many since his days at GLORY.

Kattar on the other hand was on a rise of knockout victories himself before he was stopped to a unanimous decision loss to the former UFC featherweight champion Max Holloway. This was one of the most one-sided fights in UFC history. Nonetheless, Kattar himself is known for victories over dangerous featherweights like Jeremy Stephens, Dan Ige, and Shane Burgos.

With these 2 fighters on the line, there’s no chance it’s going to be boring. They seek for the finish via knockout and one of them will surely go to that extreme to not let the fight go to the judges. Plus, in the aftermath, one of them would be put forward for title contention while the other will have to take a back seat and view what else is in store to get back on track. As exciting it is skill-wise, as important it is destiny-wise.

“It was a surprise to me,” Stephen Thompson can’t wrap his head around Kevin Lee’s release after nearly 8 years in the promotion