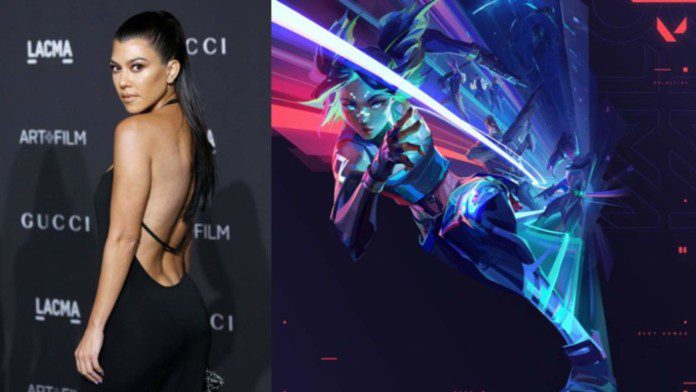 After prominent American model Kourtney Kardashian posted a Story on her Instagram account while playing Riot’s shooter, the Valorant community went insane. Valorant is without a doubt one of the most popular first-person shooter games available today.

Aside from professional and casual gamers, Valorant is also being played by a slew of celebrities and stars to keep people entertained. Many gamers have been drawn to the game because of its unique theme and gameplay.

Kourtney Kardashian is fan of Valorant

Kourtney Kardashian, who has 161 million Instagram followers, shared a photo of Riot Games’ popular tactical first-person shooter on her Instagram story on Sunday. Kardashian is a model and television personality who is most recognized for her role in “Keeping Up With the Kardashians.” She has amassed a sizable following across a variety of social media platforms.

The VALORANT community was taken aback when they learned that the American model had dabbled in gaming. Kardashian’s fiancé Travis Barker, the drummer for the rock band Blink-182, has a history with video games, which makes her move into the industry a little less shocking.

Snoop Dogg and T-Pain, for example, have already demonstrated their presence on Twitch by streaming their gaming. Aside from them, a slew of celebrities has also streamed on Twitch and YouTube.

Kourtney Kardashian is a model, media personality, and socialite from the United States. Following the 2005 series Filthy Rich: Cattle Drive, the California-born model became a known face to reality-television viewers.

Kourtney has also appeared in hit TV shows including Keeping Up with the Kardashians and Kourtney & Kim Take Miami.

Kourtney Kardashian revealed in 2010 that she will be working for the apparel label K-Dash. Kourtney is also a spokesperson for the PerfectSkin skincare product.

Gunaditya Tripathi - May 13, 2022
This year with the new regulations, all the teams like Ferrari, Haas, have tried to make their comeback on the grid, and they have...