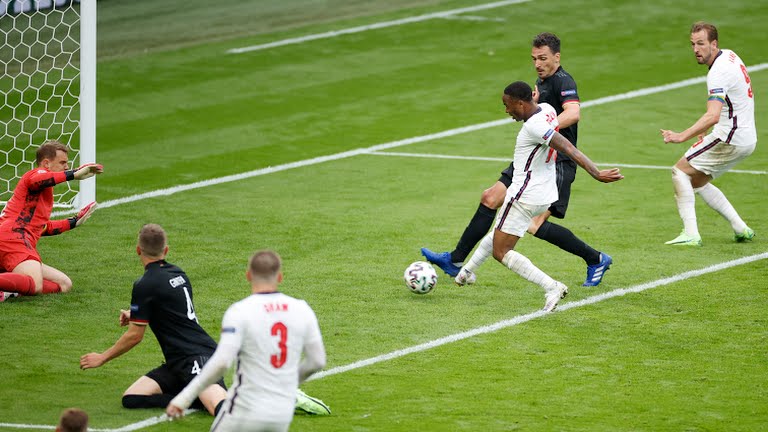 England are playing Germany in the Round of 16 match in Wembley, in what is so far one of the biggest matches of the EURO 2020. Raheem Sterling has given England a crucial lead against their German opponents to give them a crucial 1-0 lead in the 75th minute of the match.

The goal came in the second half of the match, just when Jack Grealish was summoned onto the pitch by coach Gareth Southgate.

The introduction of the Aston Villa star, instantly impacted England’s attacking play as he received the ball just outside the German penalty area. He passed it onto the left flank where Luke Shaw had already made a run and the left-back delivered a perfect cross into the box.

Raheem Sterling and Harry Kane had both made runs into the box, and it was Sterling who made his move ahead of his marker Hummels, and put in the touch which took the ball into the net past a diving Neuer in German goal.

“It looks to be coming home.” Harry Kane has given England a second goal as comfort and the match looks to have been put to bed as Jack Grealish once again became the architect for the Three Lions. He received the ball on the left flank and moved in field to deliver a perfect cross for Harry Kane who headed it home to secure the match for England.