Smackdown is second longest running weekly television show. The Blue brands run is only behind WWE’s other main roster show, Raw. The show had aired its pilot episode way back in 1999. Since then, different eras of the Blue brand has been marked by the various set designs. Over they years, the set has gone through several changes in the design.

The most popular stage among all of these, is the Iconic Fist stage, which was used from 2001-2008 none of the designs have been able to match the popularity of this. But if there is one set designs  which has come close to the popularity of the Fist, it is the Ovaltron. It was WWE Smackdown’s debut stage.

The Ovaltron had four oval strips on the entrance, from where the Superstars entered, and had a fifth oval screen in the back. The set was used till 2001. But the fans have started talking about the Ovaltron once again, as the unique design recently made its return – interestingly, not on WWE television.

The podium of the 2022 Winter Olympics was recently revealed. As soon as the design was unveiled, viewers noticed the uncanny resemblance to WWE’s The Ovaltron. The Beijing Winter Olympic podium design involved multiple oval rings, with an oval screen at the back. But this isn’t all, the podium has also adopted the Blue theme, which makes it seem like a replica of the Smackdown stage.

The resemblance between the Beijing Winter Olympics and the old Smackdown set is obviously uncanny. Several fans took to Twitter to share their views on the similar designs. Some even went as far as questioning if it really was an Olympics event or WWE! While others mentioned that WWE managed to make a WWE set better than WWE.

The 2022 Winter Olympics is being underway in Beijing, China. The event kicked off on 4th February, and will be continuing till 20th February. This is the first Winter Olympic Games in China and third overall Olympics in the country. 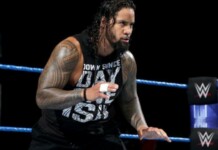 Rishika Saha - May 17, 2022
Toto Wolff, team principal at Mercedes, has pledged to do "whatever we can" to expand diversity in F1. Lewis Hamilton, seven-time Formula One world...