The fastest man on Earth, Usain Bolt needs no introduction owing to his magnanimous athletics career. The mighty Jamaican has won as many as eight Olympic gold medals apart from numerous medals at the various editions of the World Championships and other global events.

Bolt has been an inspiration for many upcoming young athletes or anybody who’s looking for some motivation in life. The Sherwood Content-born is the perfect example of an athlete full of sheer passion, determination and hard work towards the game.

One of the most decorated Olympians had also shared plenty of life lessons and quotes from his personal life before drawing curtains to his stellar after the Rio Games in 2016. Let’s look at some of the top Usain Bolt quotes which will keep you inspired even in the toughest of times.

Best Quotes by Usain St. Leo Bolt to keep you inspired in toughest of times

Here are some of the most inspiring quotes by the ‘Lightning Bolt’: 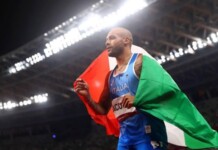 “My time has gotten better since I’ve gotten older”: 70-year-old Michael Kish compared to Usain Bolt as he claims World No. 1 title

Atrayo Bhattacharya - May 16, 2022
The World No.1 Iga Swiatek has stayed true to her ranking as she has dominated the field this year and won her fifth WTA...