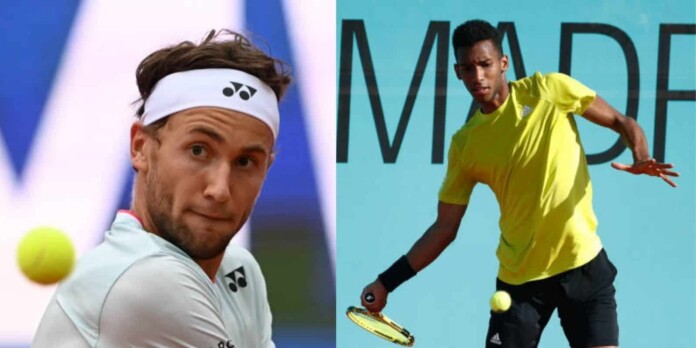 World No.20, Felix Auger-Aliassime will take on World No.24, Casper Ruud in the opening round of the 2021 Madrid Open on May 3.

The 20-year-old has played three matches on the clay season. After a poor start in Monte Carlo, the Canadian knocked out Lorenzo Musetti and Shapovalov in Barcelona, before going down to Stefanos Tsitsipas in the quarterfinals. Working with Toni Nadal will surely keep him in good stead going ahead, but it remains to be seen how far he can go in Madrid.

On the other hand, the 22-year-old comes into this tournament with plenty of matches on clay this year. After making the quarterfinals in Marbella, Rudd went onto reach the semis in Monte Carlo, where he was downed by Andrey Rublev. Currently, Rudd is playing in Munich, where he is due to face Nikoloz Basilashvili in the semis. Much to his credit, the Norwegian player has taken out big names on the clay such as Pablo Carreno-Busta, Fabio Fognini and Diego Schwartzman. Out of nine matches, Rudd has only lost two. He comes in with perfect preparation to play the Madrid Masters.

These two have met only once on the ATP tour. The Canadian won their only exchange on the hard court in Florida, in 2019.

Rudd has played more number of matches on clay as compared to his opponent. This certainly augurs well for the Norwegian player. Rudd has also made deep runs in almost every clay tournament this year. Moreover, his ability to keep hitting high, spinning balls deep into the court should get him across the line.