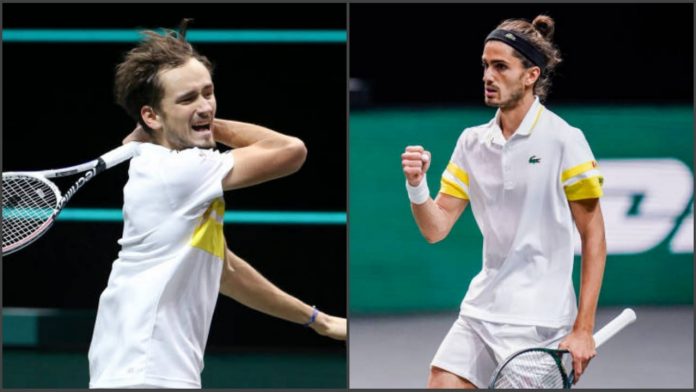 Daniil Medvedev will take on Pierre-Hugues Herbert in the Final of the Open 13 Provence. Medvedev is currently the World no.3 on the ATP rankings while Herbert is the World no.93.

Daniil Medvedev has come back strongly after his first round exit in Rotterdam, eager as per his own words to build a new streak. The top seed is yet to be broken this week and that’s a proof to how well he’s been serving.

Medvedev defeated Gerasimov in the first round before a tricky quarter-final encounter against Jannik Sinner. But the Russian got the better of the Italian easily in straight sets 6-2,6-4. He didn’t break much sweat in the semi-final because of Matthew Ebden‘s retirement at 6-4,3-0.

His opponent Frenchman and doubles specialist Pierre-Hugues Herbert has had a dream week in Marseille. He upset 6th seed Kei Nishikori 6-1,6-4 in the first round.

After getting past Norrie in the second round, the home favorite defeated title contender and 2nd seed Stefanos Tsitsipas in the quarter-final 6-7(6),6-4,6-2. In the semi-final he moved past countryman Ugo Humbert 6-3,6-2 to set up the final with Medvedev.

This will be the third meeting between the duo. The H2H stands deadlock at 1-1. They last met in the 1st round at Roland Garros 2019 where the Frenchman won in 5 cracking sets.

Coming into the final, both players won’t be too fatigued. Herbert looked rapid around the court despite a long match with Stefanos Tsitsipas. Medvedev was lucky in a way as Matthew Ebden had to retire in the second set.

The Russian has been serving too good in the tournament so far and the return on his serve will be crucial for the Frenchman. Expect a mighty clash with neither dropping their guard on serve. The Frenchman has the game to take the sets to the tie-breaker but can’t win it because of Medvedev’s class.