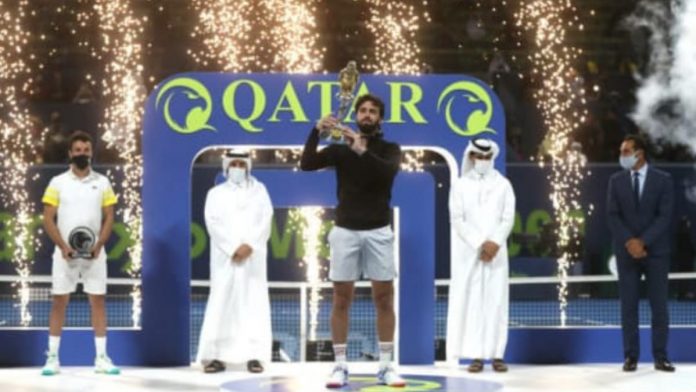 World no.42 Nikoloz Basilashvili gets the better of 5th seed Roberto Bautista Agut in the final of the Qatar Open to lift the trophy.

The final was perfectly poised in the Gulf desert nation with characterized hot, dusty wind that slowed down the on-court exchanges between the two finalists.

The first set was very tight with both players holding serve. Their was no break-point opportunity created by either one of them showing their discipline on serve.

The tie-breaker was also fought very tightly, with neither of them leaving any stone unturned. Eventually, Basilashvilli gained a mini-break advantage to close out the set 7-6(5).

The Georgian found his rhythm in the next set and bought out his ‘A’ game. He served well and converted 100% of his break points. His court coverage was backed with winners left, right and centre.

Eventually he closed out the set 6-2 to win the match and his fourth career title. Basilashvili had a dream week in Doha, having earlier defeating Roger Federer in the quarter-finals.

Also read: ‘I’m convinced he can reach 400 weeks as number one,’ Daniil Medvedev on Novak Djokovic