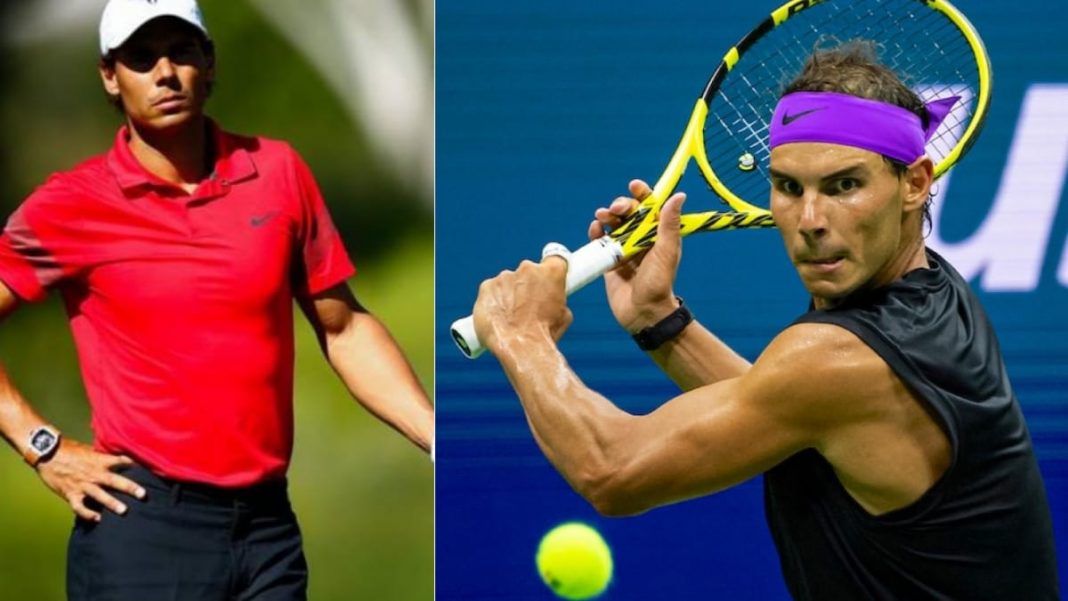 Undoubtedly Rafael Nadal is one the greatest player of tennis we’ve got ever. Also, the Spaniard is just one Slam away from the Swiss maestro [20 slams]. Now, with Roger skipping this season due to his knee injury, many believe that Rafa will either leave Roger behind or atleast equals the number of Slams.

But what comes as a surprise is that the World No.2 excels in sports other than tennis too, specifically, in golf. The 19 time Slam champion has a great aptitude for golf, with a remarkable ‘0.4 handicap’ which shows how good a swing he has.

Among his most ardent tennis fans, Rafael Nadal’s love for golf is well-known and the man has often claimed in the past that it is his favorite sport to play outside tennis. The news of Nadal participating in a professional golf event hosted on his home island didn’t break as a shock or a surprise.

Before settling for the 4th position on the final day, the Spaniard got off to a brilliant start in the tournament.

On Friday, when he entered the Balearic Golf Championships ‘Nadal looked quite at home’, but then suddenly the Spaniard started showing his skill.

Rafa started off his campaign in style as he led his counterparts on par 3 – including an “eagle” on par 4. The first 250 yards of a golf course comprises par 3 and 250-470 yards make up par 4. Rafa as he pocketed the holes in the predetermined number of strokes as per the event, was first in the shorter format of that match if we say in simpler words.

He then, through the match on par 4 – that is, he sank one in two strokes fewer than the predetermined number and finally achieved an eagle.

Besides playing golf professionally, Rafael Nadal has turned the sport into a leisure activity when he’s off the tennis tour and earlier has also played the Balearic Golf Championship in 2016. Coming back on the match, however, he suffered a mini-collapse in the back nine regressing to three “bogeys” on holes 7, 8, and 16.

But overall, all seemed to be going well for the Spaniard in the tournament. Although, the Spaniard was overtaken in the back nine by Víctor Mirón and Federico Páez, both tied at 70 shots, while Jaime Jaume came in third at 71 shots.

However, he can proudly take pride the Balearic Golf Championships, given he is not a full-time golf player.