Kuldeep was the Player of the Match in the previous Test. Jaydev Unadkat, who makes a comeback after 12 years, replaced Kuldeep. 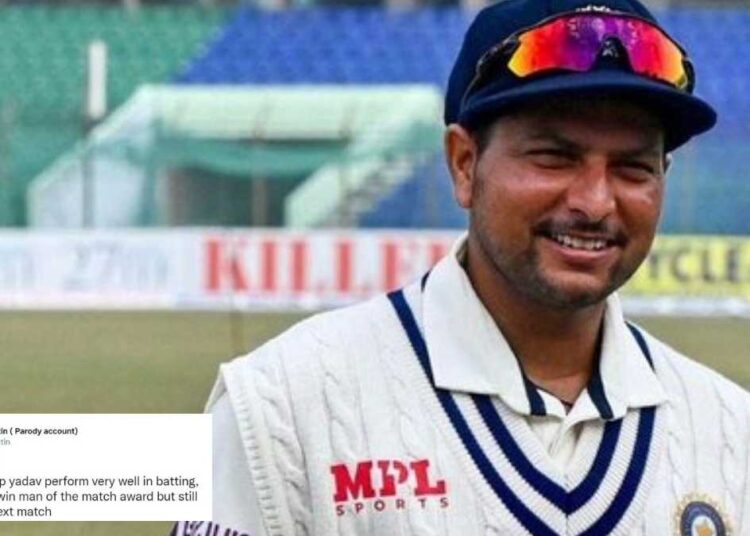 To the shock of many fans, India dropped spinner Kuldeep Yadav for the 2nd Test against Bangladesh on Thursday (December 22). Kuldeep was the Player of the Match in the previous Test. Jaydev Unadkat, who made a comeback after 12 years, replaced Kuldeep.

In the first Test, Kuldeep Yadav contributed an impactful 40 runs in his 87-run stand with Ravichandran Ashwin to save India’s innings from falling. He was the bowler with the most number of wickets as he first scalped five wickets in the first innings and picked up three more in the second innings. He ended the 1st Test with a total of eight scalps.

It’s worth to be noted that Kuldeep has also made a comeback to red-ball cricket after 22 months. Despite not getting enough chances, Kuldeep Yadav performed brilliantly in those matches he got the chance to play. Netizens are not at all happy with the decision to drop Kuldeep Yadav.

Check how they expressed their disappointment in tweets.

Saurashtra skipper Jaydev Unadkat makes a comeback to Test cricket after a gap of 12 years and two days; Lala Amarnath had waited for 12 years and 129 days. Jaydev debuted for India back in 2010 against South Africa. The then 19-year-old failed to scalp a single wicket in that Test. He hasn’t represented the Test side until his comeback to the India-Bangladesh Test. But he played seven ODIs and 10 T20Is for the Men in Blue.

Talking about the match, Bangladesh skipper Shakib Al Hasan won the toss and opted to bat first. After their 188-run loss in the first Test, they made two changes in the XI. Fast bowler Taskin Ahmed and batter Mominul Haque replaced Ebadot Hossain and Yasir Ali. Ibadat was ruled out of the first 2nd Test when he sustained a back injury in the 2nd innings of the first Test. India’s stand-in skipper KL Rahul confirmed that the only change they made in India’s XI is the dropping of Kuldeep Yadav to include Unadkat.