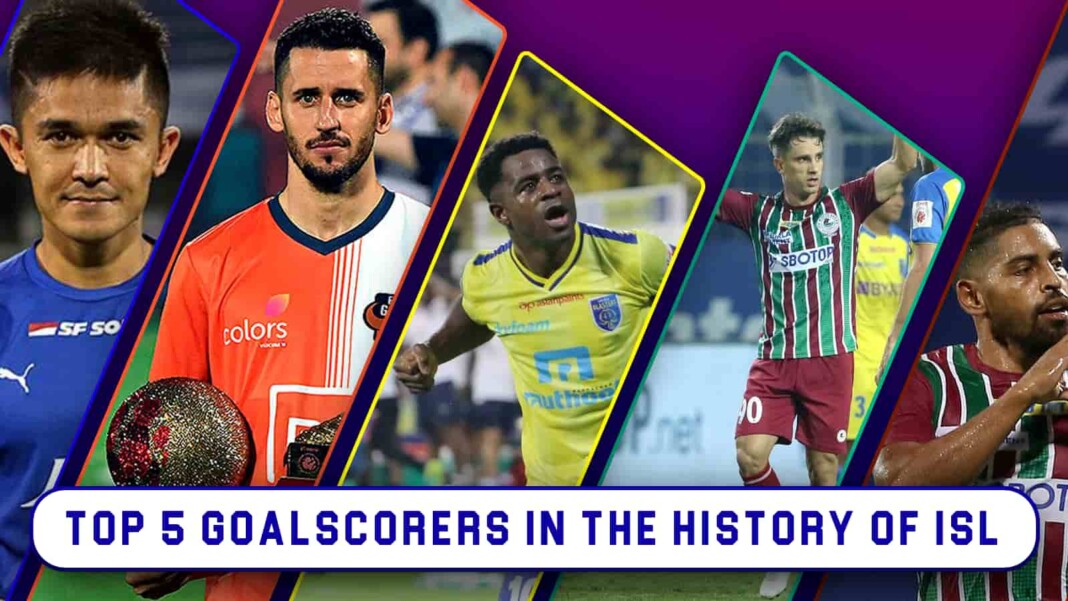 The Indian Super League (ISL) started from the year 2014 and since then we have seen some great footballers from the international stage all around the world grace the football pitch with their exceptional talent in the league. Currently ISL and I-League are the only two leagues operating in the Indian League system.

We have witnessed some legends showcase their skills in the ISL since 2014, which include Roberto Pires, Nicolas Anelka, Roberto Carlos, David James, Luis Garcia, Robbie Keane, Alessandro del Piero, Freddie Ljunberd, Diego Forlan, Dimitar Berbatov and many more. There are some players who always came on top and scored mammoth number of goals to put their clubs on top in ISL, let’s have a look on the top 10 Goalscorers in the history of ISL.

Adriane Santana is a Spanish striker who began his youth career in Deportivo La Coruna in the Tercera Division. The Spaniard made his move from Cultural y Deportiva Leonesa to Odisha FC on loan in 2019 where he continued to play till the end of his term as he went on to score 9 goals in 14 appearances for the club.

In the the next year Aridane joined Hyderabad as a free agent where he played brilliantly and scored 10 goals in 18 appearances. Aridane Santana has scored 19 goals in 32 appearances in ISL in his two terms with two clubs from where he later on went on to join UD Logroñés in 2021 as a free agent at the age of 34.

Nicolás Ladislao Fedor Flores commonly known as Miku is a Venezuelan striker who began his career in the youth academy of Valencia CF. Miku made his move from second division team at that time Rayo Vallecano, to ISL Club Bengaluru as a free agent in 2017.

Miku proved out to be in an excellent striker for Bengaluru as he scored 20 goals in his 32 appearances for the club from 2017-2019. In 2019 he made his move from the Indian Super League and is currently playing for the Spanish club Deportivo La Coruna at the of 36.

The 34 year Lithuanian striker Nerijus Valskis began his career in his native club FK Žalgiris and since then he has played in different club in different countries. In 2019 he joined Chennaiyin FC as a free agent where he proved to be an important part of the team as he became the highest goal scorer of the league in his debut season.

Nerijus joined Jamshedpur the former year in ISL as his former coach of Chennaiyin FC, Owen Coyle decided to make him a part of the Jamshedpur squad. He has scored 23 goals in his 38 caps for the ISL clubs and is currently ranked at the number eighth position of the highest scorer.

Jeje Lalpekhlua, the 30 year old Indian forward began his footballing career in his home state Mizoram where he started to emerge through the ranks to become an exceptional player. He began his ISL journey in 2014 with Chennaiyin and is currently playing for SC East Bengal.

Before Jeje was signed by Chennaiyin FC for the inaugral ISL season, he used to play in the I-League for several clubs like Pune, Pailan Arrows, Dempo and Mohun Bagan. He is the second highest Indian goalscorer and the seventh highest in the history of ISL with 24 goals in 76 appearances.

Iain Hume has been known to create havoc in the ISL, since his time with Kerala Blasters in the inaugral campaign. He has played for 3 different clubs in the ISL which includes Kerala Blasters, Athletico de Kolkata and Pune City.

His stint with Athletico de Kolkata in the 2015/16 season of ISL was one of the most remarkable as he won the title with the club and became the second highest scorer in the League with 7 goals. He has a total of 28 goals in 69 appearances and is the sixth highest goalscorer in the history of ISL.

The Captain of the Fiji National team, Roy Krishna leads the team from the forward line and currently is a part of the ATK Mohun Bagan where he was also recently appointed as the captain. Athletico de Kolkata signed Roy Krishna in 2019 as he played a vital role in ATK’s third title in the ISL.

After ATK was merged with Mohun Bagan Roy Krishna extended his contract to lead ATK Mohun Bagan from the front line. He has score 29 goals in just 44 matches and is currently the fifth highest goalscorer in the history of ISL.

The Brazilian winger Marcelinho began his career in the Spanish football club Athletico Madrid at the age of eighteen. He joined Delhi Dynamos in 2016 as a free agent and had one of the best form in his lifetime. He won the golden boot in his very first season with Delhi with 10 goals in the league.

Marcelinho has played for 4 different clubs in ISL other than Delhi, which include Pune City, Hyderabad, Odisha FC and ATK Mohun Bagan. He has scored 33 goals in 79 matches for 5 different clubs and is currently the fourth highest goalscorer in the history of ISL.

Bartholomew Ogbeche began his career early on in the French club, Paris Saint Germain. The 37 year old striker has been playing in ISL since 2018 when he was first signed by NorthEast United.

The Captain of the Indian National, Sunil Chettri has been an exceptional talent for the Indian side for the past 15 years. The 37 years old striker has still been making an impact on the field with his performance as recently he won the 2021 SAFF Championship and also became the highest goalscorer in the campaign.

Sunil Chettri has spent his entire career playing for different clubs in the I-League and the ISL. He is currently playing for Bengaluru as he leads the team from the forward line with his experience. He has a mammoth number of 47 goals in 94 appearances and is second highest goalscorer in the ISL history just falling behind by one goal.

The Spanish forward Coro has been the academy product of the RCD Espanyol from where he emerged through the ranks to become an exceptional striker. The Spaniard played for FC Goa from 2017-20 and marked his performance with his exceptional goalscoring abilty.

Coro has won a golden boot and golden ball during his time with FC Goa and is currently the leading goalscorer in the history of ISL with a whooping number of 48 goals in just 57 games. He is currently playing in the Spanish third division team CD Atlético Baleares.

Also Read: ISL: 5 Most Expensive signings in the history of the league