Manchester United faced Brentford in a tricky clash in the Premier League at the Brentford Community Stadium yesterday night. The Red Devils won the game 3-1 but the score line did not exactly depict the outcome of the match as Manchester United were not at their best yet again.

Brentford dominated the first half of the game after having 6 shots on target and numerous chances to score first. Red Devils keeper David De Gea kept his team in the match with 2 brilliant saves from point blank range. Ralf Rangnick’s men were unconvincing in the first half and failed to create a single chance in the first 45 minutes.

However, the momentum shifted towards the Red Devils in the second half and there was much more intent from Rangnick’s men. Anthony Elanga opened the scoring for Manchester United after he converted a brilliant pass from Fred. Shortly after taking the lead, 20 year old Mason Greenwood got on the scoresheet as well to make it 2-0 to Manchester United. The last goal for the Red Devils came from Marcus Rashford after a brilliant bit of play by Bruno Fernandes and Scott McTominay.

Manchester United are now edging closer to the top 4 and have a game in hand when they play their nearest rivals West Ham United on Saturday in a must win match. However, following their defeat to Ralf Rangnick’s men, Brentford have now lost five out of their six Premier League matches and sit 14th in the Premier League standings.

Brentford boss Thomas Frank was brutally honest in his post-match interview following his team’s 3-1 defeat against Manchester United in the Premier League. The Danish manager did not hold back when it came to the Red Devils and was said to be proud of his team’s efforts.

The Danish added,” They are unbelievably lucky. I know all the stuff about taking chances. They changed the system against little Brentford. One of those nights, fair play to David de Gea, if we get those chances again, one will go in the back of the net.”

“Our intensity killed them, we showed that in the first half, we played the Brentford way. The game opened up but they didn’t have a chance before their goal. That is why they pay $80m for Jadon Sancho and he’s not even in the team,” said Frank.

The Danish added,” Of the three goals, the second is the most disappointing and difficult to come back from. The way we smashed them in the first half was fantastic, so proud of my team. I know goals change the momentum but if you look at the overall performance, there was only 1 winner and that was us.”

Lastly, Brentford boss Thomas Frank said,” I’m unbelievably proud of the team and the players and the way we absolutely destroyed Manchester United in the first half. we had six chances. They had zero. It’s a miracle they were not 2-0 down. My boys always keep running and fighting and they did that until the end.”

Also Read: “All Premier League teams should be made to play their fixtures”-… 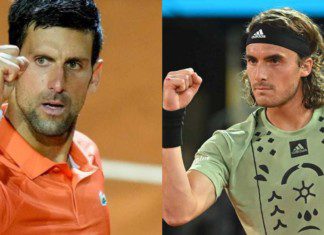 Pritha Ghosh - May 15, 2022
The tenth meeting between Novak Djokovic and Stefanos Tsitsipas will cap off a thrilling week in Rome. When it comes to French Open contenders,...