English heavyweights Arsenal and Manchester United face each other in a thrilling Premier League game at the Emirates. Read further for predictions, lineups, and more team news. 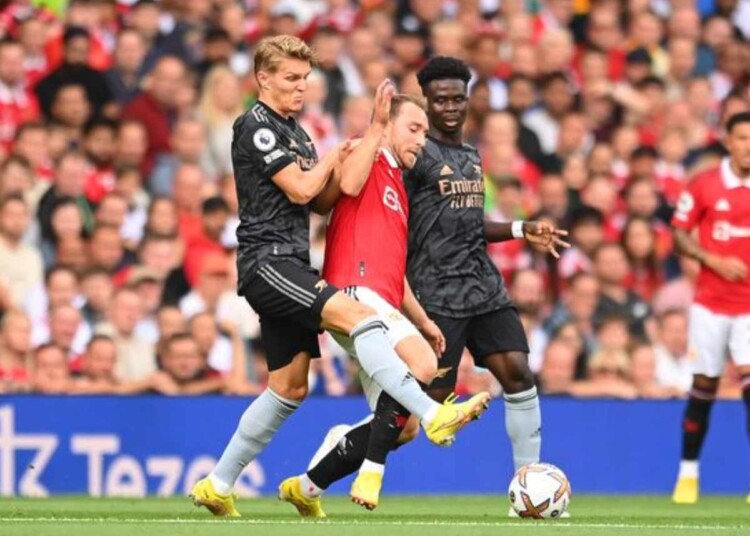 A top fixture for Premier League fans awaits as league-leaders Arsenal take on the mighty Manchester United side at the Emirates Stadium. It will be an important game for both sides as Arsenal would want to increase their lead at the summit while the Red Devils would look to reduce it. Both sides have been in transitional phase for quite some time before discovering their mojo this year.

One of the classics of the Premier League, Manchester United and Arsenal have produced mouth-watering games for ages. Earlier in September, Arsenal faced a resurgent Manchester United and failed to inflict any damage on the wounded Devil. The Gunners went back to London with a their first and only loss of the season up until now. Since then, Arsenal’s youthful exuberance has impaled all that have crossed them, reminding the fans of a certain “Invincibles”.

Erik Ten Hag‘s team also looks optimistic heading into the tunnels of Emirates. They have won five of their last six Premier League games, courtesy of Marcus Rashford‘s scintillating form and Casemiro’s unmistakable class. After almost a decade of turmoil and confusion, the Manchester club finally has found some direction under ETH as they have already beaten top clubs like Liverpool and Manchester City this season.

The Gunners would be seeking revenge on Man United for tarnishing their unbeaten run earlier. Arsenal looks confident coming into the fixture after a comfortable 2-0 victory away from home. They do not have an injury crisis but still miss out on players like Reiss Nelson, Gabriel Jesus, and Mohamed Elneny. However, captain Martin Odegaard is delivering the goods to make up for the goals from Jesus’ quota.

Although Manchester United look deadly, they will be playing without various crucial players. One of them is Casmeiro, who recieved the fifth yellow card of the season in United’s last match, much to the dismay of his coach.. Players like Diogo Dalot and Van de Beek are also unavailable against the league leaders.

Erik Ten Hag and Mikel Arteta would be preparing for a game of chess on the football pitch. As the two former apprentices of Pep Guardiola clash, it will be exciting to see which club would come out as the winner in this exhilarating contest.

Mikel Arteta will have a tough time against an improving Manchester United side. The Gunners are in a spectacular run of form this season and will still be looking forward to walking past their opponents again. The scoreline should end 3-1 in Arsenal’s favor due to a home advantage. Do you think Erik Ten Hag and his team will be able to stop this Arsenal side?